John Fancy was born in the village of Lund near Driffield, north of Hull. The family home was the local vicarage but his father managed the local estate. He was delivered by his grandmother who was the local midwife on 9th March 1913. He went to the village school before being enrolled in Hymers College in Hull. He went on to study Land Management and then to work in the Parks and Gardens Department of Scarborough Council. His chosen path changed dramatically when he volunteered for the RAF in 1935. He married his wife Elsie in 1937. He firstly trained as an aircraft fitter but when he saw that war was becoming inevitable he volunteered for air crew. As he had a slight colour blindness he could not be a pilot bust was assigned as Navigator/Observer. He completed his training in December 1939 and was promoted to Warrant Officer and placed with 110 Squadron that were based at RAF Wattisham in Suffolk. 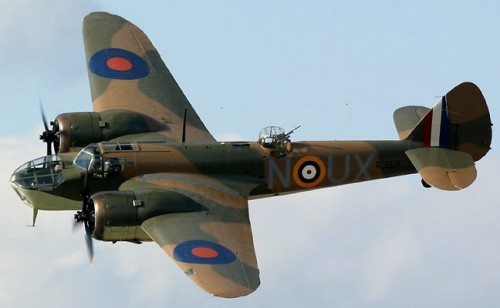 http://www.pilotfriend.com/
A Blenheim Bomber as John Fancy flew in.

110 Squadron had carried out the very first RAF bombing raids of WWII when they targeted enemy ships in Wilhelmshaven on 4th September 1939. John Fancy however was engaged in delivering bombers to Finland to assist in their war effort in February 1940. They were given twelve planes that were painted in the blue swastikas of the Finnish Air Force. They wore civilian clothes and refueled in Scotland and Norway before landing on a frozen lake. They were then to train up the Finish crews before taking a Finish Airlines Junkers plane back to Sweden and two months later they returned to Suffolk. In later life he attended the 75th anniversary of the Finnish Air Force and was give the Winter War Medal by their UK Ambassador. In the spring they were involved in bombing Norwegian airfields near Stavanger.

Once the 'Phony War' was over and the German Blitzkrieg was under they were swapped to operations in support of the British Expeditionary Forces. On 14th May 1940, the very day that he had learned that his wife was expecting a baby, 12 aircraft of 110 Squadron took off on raids to destroy bridges over the River Meuse. John Fancy's target was near Sedan. His plane managed to drop their bombs successfully on target but as they turned for home they were hit by anti aircraft fire and crashed in the grounds of a Chateau. All the crew of three survived but were captured. Another four of the twelve planes were also shot down. 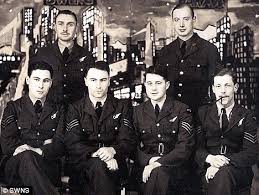 http://www.dailymail.co.uk/news/article-1066849/The-Mole-Britains-prolific-PoW-tunnel-digger-World-War-Two-dies-aged-95.html
John Fancy (seated extreme right with pipe) and fellow POW's in Stalag Luft 1, between 1940 and 1942.

Their first camp was Stalag Luft 1 in Barth northern Germany. His POW number was No.89 so he was one of the very first to be captured. John was already eager to escape and began to earn his later nickname by starting to dig a tunnel in order to escape. He started a tunnel under the floorboards of his hut and in three weeks he had dug down 6 feet and extended a tunnel 2 feet diameter to half was to the perimeter wire. Unfortunately extremely heavy rain caused the tunnel to collapse and it had to be abandoned. This camp was closed in 1942 and by later that year he arrived at Stalag Luft III near Sagan in Poland. This is where the exploits that were the basis for the book and film 'The Great Escape' occurred. His expertise in tunneling were put to work. The plan was to build three tunnels , Tom, Dick and Harry. John was involved in building 'Tom' that was started from the corner. He was very lucky to survive a collapse where he was completely buried but his mates just managed to clear a space to his face to allow him to breath until he could be dug out. However John was transferred from the camp before the breakout, and tunnel 'Tom' was discovered. Later though 76 men managed to escape trough tunnel 'Dick' the following year. Only three of them reached safety and fifty were killed.

All in all John helped dig eight tunnels and at least three of them were instrumental in escapes of men. He was Britain's most prolific POW tunneler and the Germans gave him the nickname of 'The Mole'. All in all he made 16 attempts to escape, three by tunnel and other methods included absconding from work parties, cutting through the wire and jumping from moving trains. When he was free he walked over Latvia, Lithuania and Germany even stopping to ask a German soldier for directions. On his last escape he managed to get to the Baltic with to others, and steal a boat. It was was only once they were well out to sea that they were taken once again. He had also been recaptured by an extermination unit and had to endure three mock executions. All the escapes earned him 34 weeks in solitary confinement, an eight of his total time as a POW.

His captivity came to an end at the end of April 1945 when his camp in Lithuania was liberated. He was found to be lice ridden and weighing only 6 stone but still tunneling. He was flown back to Suffolk and joked that his 4 hour flight in 1940 had taken 4 years and 10 months!

http://www.telegraph.co.uk/news/obituaries/3131228/John-Fancy.html
John Fancy after the war.

To recover from his deprivations he was kept in RAF hospitals for three months and it is whilst in hospital in Lancashire that he met his daughter for the very first time. He went on to have another daughter and a son. He was invalided out of the RAF in August 1945 and went to live north of Hull. Here he set up a market garden and opened green grocers shops in the area. He was a keen fisherman and a good tennis player and enjoyed painting. After his wife died he moved down to Devon to be near his daughter and was very popular there too. He died on 18th September 2008 aged 95. A prized possession of the family is John Fancy's tunneling tool of preference a knife given to him by his captors. It was for eating with but the large rounded handle meant that it was comfortable to hold and loosened the soil to then use a shovel to move clear. RIP The Mole. They don't make them like that any more.