Henry Wolsey Bayfield was born in hull on 21st Jan 1795 to relatively 'well to do ' parents. The family was originally from Norfolk. There are no records of his education but any formal education would have been short as he was enrolled in the Royal Navy two weeks before his 11th birthday as a Young Gentleman Volunteer.

His early career was very hectic. His first ship was HMS Pompee that was captured from the French soon after it had been built by them. Whilst on her they took a French privateer. 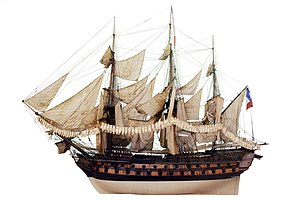 HMS Pompee kept her French name and under the white ensign was  a 74 gun ship of the line. This model is of a sister ship.

He was transferred to HMS Queen, a 3 deck 90 gun vessel. Another move to HMS Duchess of Bedford made three ships in 9 months. In this ship he was wounded in a battle with two Spanish vessels of Gibraltar. His commanding officer said of him, ' Tho' a youth he displayed presence of mind that would become the greatest warrior'. He was then moved to HMS Beagle an 18 gun sloop. His promotion came thick and fast, midshipman in 1810, Master's Mate in 1814 and he served in the Mediterranean, saw action off France and Spain and sailed off Holland. He spent two years in the West India station and at the age of 15/16 had a year in Canada before returning to England to sit his Lieutenant's examinations which he passed in 1814. He returned to Canada on HMS Lake Camplain. He was there recruited to the team surveying the Canadian Lakes who had realised the enormity of the task. He quickly learned all he could from them and was soon made the Captain of the sloop 'Star'. It was thought that an accurate survey would be a good defence against any American threats against Canada.

His superior returned to London in 1817 and Henry Bayfield, aged 22, was 'de facto' Surveyor General for Canada! The next 40 years were then taken up with this work. Much of this surveying was carried out in the summer months from two rowing cutters where they either slept on beaches or in the boats. They suffered swarms of mosquitoes, fever and heat, along with lack of food etc. The tools of his trade were lead lines, sextants and compass. In the winter months they would return to civilisation and draw up their charts and make accurate notes from the log books and scribblings. They where then sent back to England to be engraved then brought back for very strict checking. 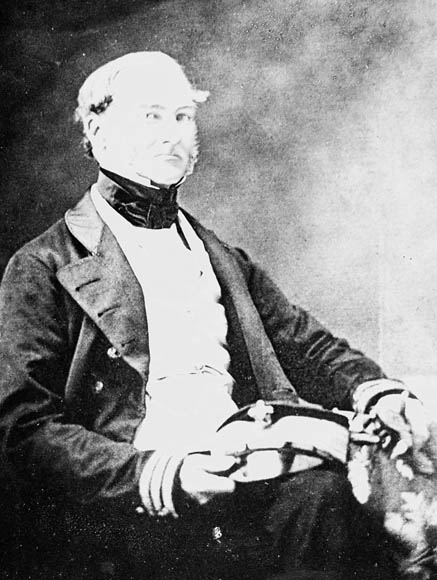 In 1825 he returned to England to oversee the publication of his charts and pilot books of the Great Lakes, but was back in Canada in 1827 and set about the detailed surveys of the St Lawrence River and Gulf. This mammoth task took him 14 years. He was promoted to Lieutenant in 1834 and so must have felt able to marry Miss Fanny Wright in 1838. They had six children together. In 1841 after completing the St. Lawrence he turned his attention to the Atlantic coastline which occupied him until he retired in 1856 with failing health. Though he lacked any formal scientific training he was a great observer and had an analytical mind. He collected rocks and minerals and sent them to the British Museum, he wrote papers on the fauna of the area as well as geology along with such things as the tides, mirages and the Aurora Borealis and was a member of the Royal Astronomical Society.

Title piece of a chart of Lake Superior surveyed between 1825 and 1827. 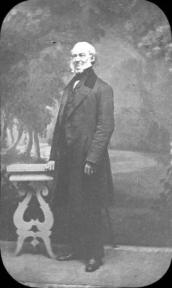 He continued with promotions on the retired list making full Admiral on the retired list in 1867. He was also given an additional pension on top of his service one. He retired to Charlottetown on Prince Edward Island where he lived a quiet life until his death in 1885. 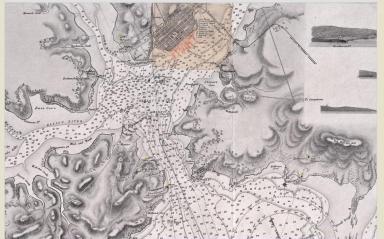 Details chart Of Charlottetown where he retired from a survey he undertook in 1843.

His charts often had small sketches to give the actual view that would be seen by the mariner. This one appears on another chart from 1843.

Despite almost entirely self trained he has highly disciplined, accurate and diligent in all he undertook. He had a distinguished appearance and was courteous to all. He took great care of his men and was well liked by them also. He was a devout Anglican and held religious services on all his ships on Sunday. He completed surveys that brought safety and the opening up of Canada from the western shores of the Lake Superior, through the Great Lakes and the St Lawrence to Bell Isle. He then charted the coats of New Brunswick, Nova Scotia and Prince Edward Island. Prior to 1884, when the Canadian Government took over the responsibility for the work, the British Admiralty produced 215 charts of Canadian waters. 114 of them were drawn by Henry Bayfield from Hull.

He may not be remembered in Hull but in North America his name is given to the Bayfield River and the Town of Bayfield in Ontario, the city of Bayfield in Nova Scotia and Wisconsin. The US Navy even named a ship after the city in WWII. The Canadian Hydrographic Service names one of its vessels after him also. There also many plaques around the nation that praise his achievements. As as sea port maybe Hull should have some sort of remembrance to another of their maritime heroes.