In 1872 an Act of Parliament was granted for the construction of a public hydraulic power system. There were private hydraulic system in place working dock and railway equipment in Newcastle, Burtisland, Glasgow London and Swansea before this but only working for the one company. The initial system was to cover 60 acres and they were permitted to take a million gallons of water a day from the River Hull at a cost of £12 10s per 250,000 gallons per year to the Hull Corporation. The Hull Hydraulic Power Company opened for business in 1876. Their premises were on Marchell Street and still survive. 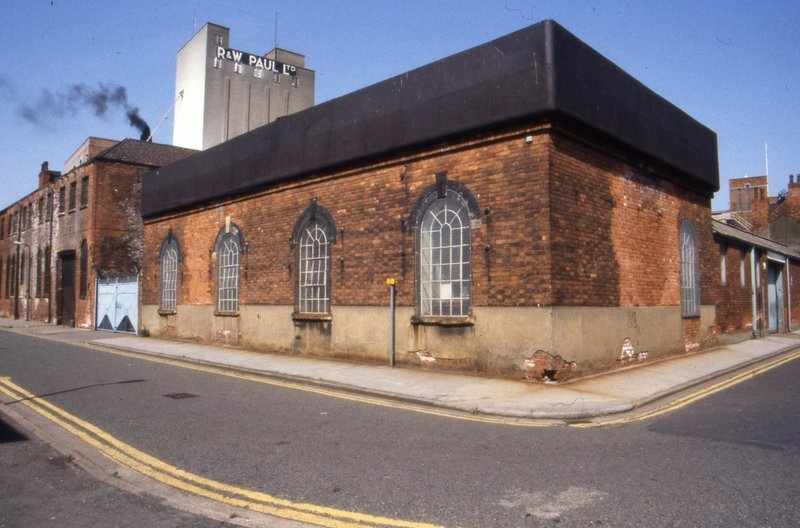 http://www.davidjessop.co.uk/morewincolmleearea.html
This photo from David Jessop's website was taken before the erection of a Blue Plaque. It clearly shows the holding water tank hat also allowed the mud to settle out of the water before being used.

In the building in the photo above there was space for 4 x 60HP engines, but only two were initially installed, and each could pump 130 gallons per minute at 700 psi. The roof water tank was fed by one of two centrifugal pumps lifting the water 35 ft from low tide level to the roof and along the 125 ft to the roof at a rate of 800 gals/min. There was a return line to act as an overflow and to assist in cleaning the tank. There were two Lancashire boilers to provide steam for the engines and pumps.

The system laid was a 6" cast iron main that went from Marchell Street, down Wincomlee, under the entrance to Queen's Dock entrance from the River Hull and terminating near the western side of the South Bridge that was near Blackfriar Gate now. (Between Myton Bridge and the Tidal Barrier). At a suitable distance along the main were isolation valves and also air cocks to be able to drain the system of air. At intervals also provided were 'T' pieces of 2", 3" and 4" for supply to customers. The initial length of the main was 1485 yards. At the Marchell Street site was also provision of two hydraulic accumulators. These were to be unlike the very tall hydraulic tower at Grimsby that was expensive to build but a weight on a piston. In Hull the piston in the system was 18" diameter and had a stroke of 20'. On top of this was placed a load of 57.5 tons of copper slag that provided a constant pressure of 610 lbs per square inch. Only one was installed initially and provision was made for another at the southern end of the line.

This is the hydraulic accumulator at Bristol Harbour that is still in operation. This one was installed in the 1920's.

By 1895 about half a million gallons were being pumped into the system each week and about 58 machines were being powered by the system including cranes and dock gates with machinery for ship building. The system reached it's zenith in the early 1900's extending to a pipeline length of 2.5 miles and used by around 140 machines. The system remained in operation right through until WWII when the severe bombing of Hull made it impossible to maintain the pipework intact and the company was wound up in 1947. This saw the retirement of Mt. F.J. Haswell who was the Manager and engineer and had worked for the Hull Hydraulic Power Co. since since 1904.

Hull City Council erected a Blue Plaque to mark the building that was the first public hydraulic power station in the UK in 1990.

There are still occasional reminders of the old system and Hull Hydraulic Power Company. If you look carefully on the streets you may still come across one of the system valve covers. The Hull system had been constructed and installed by the Hydraulic Engineering Company that was based in Chester. It's Managing Director, Edward Ellington, studied the system and used it as a blueprint for the many future systems that he and his company installed in the UK and abroad. There were other private hydraulic system installed at Albert Dock (1869) and Alexandra Dock (1885).