In actual fact Robinson Crusoe didn't sail from Hull as he is a fictional character! Even if he had been a real person his name would have been Robinson Kreutznaer son of a German immigrant settled in York and married a woman with the name Robinson! In the book (The books actual title is "The Life and Strange Surprizing Adventures of Robinson Crusoe, Of York, Mariner: Who lived Eight and Twenty Years, all alone in an un-inhabited Island on the Coast of America, near the Mouth of the Great River of Oroonoque; Having been cast on Shore by Shipwreck, wherein all the Men perished but himself. With An Account how he was at last as strangely deliver'd by Pyrates.),he is supposed to have left from Queen's Dock in Hull during 1651 for a short trip to London where upon a series of adventures culminated in him being stranded on a desert island. Furthermore he would have found very difficult to sail from Queen's Dock as it wasn't opened until 1778!!

This is the island where Alexander Selkirk was marooned. It was called Mas a Tierra in the Juan Fernandez Islands of Chile. It was renamed Robinson Crusoe Island in 1966.

The story seems to be largely based on the life of Alexander Selkirk who was a Scottish sailor who was marooned on a deserted island in the South Pacific from 1704 to 1709 as he feared that the ship he was on was unseaworthy. Daniel Defoe would have read of these exploits and used them in his story.

Daniel Defoe was born around 1660 in London. His actual name was Daniel Foe until he added the De to sound more aristocratic. He became a merchant trader and did well for himself and had great ambitions. He seemed to have been often in debt having failed business ventures and political intrigues that saw him become a 'spy' for various groups. His always requiring more money maybe drove him to writing novels and having the story of Alexander Selkirk as a blue print would have sped up the process. 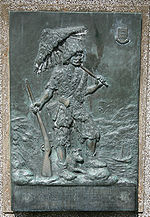 The Robinson Crusoe plaque is found on the north side of Queens's Gardens. The words below are quite hard to make out but look like ' Robinson Crusoe, most famous character in fiction, sailed from here September 1st 1651. Sole survivor from shipwreck he was cast upon a desert island where he spent 28 years, 2 months and 129 days. An example of resolution, fortitude and self reliance.
Financed by public subscription, the plaque was unveiled on 21st May 1973.
'Had I the sense to return to Hull. I had been happy'.

Daniel Defoe probably did visit Hull as he published 'A tour thro' the whole island of Great Britain'
which was published in three volumes between 1724 and 1727. He probably id copy some of the details for the book from other writers but it is fairly certain that he visited Hull in the course of his business as a Merchant. Of Hull he wrote, 'From Beverley I came to Hull, distance 6 miles. If you would expect me to give an account of the city of Hamburg or Danzig or Rotterdam. or any of the second rate cities abroard, which are famed for their commerce, the town of Hull may be a specimen. The place is indeed not so large as those, but in proportion to the dimensions of it, i believe there is more business done in Hull than any town of its bigness in Europe'.

He also said of the trade and merchants of the town; ' Again they supply all these countries in return with foreign goods of all kinds, of which they trade to all parts of the known world; nor have the merchants of any port in Britain a fairer credit, or fairer character, than the merchants of Hull, as well for the justice of their dealings as the greatness of their substance or funds for trade'.

His description of the town is, 'The town is exceedingly close built, and should a fire ever be its fate, it might suffer deeply on that account; 'tis extraordinary populous, even to an inconvenience, having really no room to extend it self by buildings. There are but two churches, but one of them is very large, and there are two or three very large meeting-houses, and a market stored with an infinite plenty of all sorts of provisions'.

It is clear the Daniel Defoe had a soft spot for Hull through his commercial dealing with the merchants of the town, and so felt well able to pen the lines for Robinson Crusoe in his book, 'Had I the sense to return to Hull. I had been happy'.
Posted by NB Holderness at 05:31