William de la Pole was born some where between 1290 and 1295 at the trading port of Ravenser. This was on a previous manifestation of Spurn Point and was a very busy place where lots of money was made. It is thought that his Father was a merchant there and he was the middle of three brothers. The eldest Richard, then William and the youngest John. At an early age the two elder brothers established them seleves as traders in their own right. In about 1310 they moved to Hull to continue trading. This may have been due to the erosion of the spit where Ravenser was built and the eventual loss of the town to the sea. William did toy with idea of making Hedon his base as it had a small port and was a safe harbour only about 6 miles from Hull.

By 1317 the brothers had become well established in Hull and both were Deputies of the Royal Chief Butler which meant they were well connected and in 1321 to 1324 they were both Chamberlains of Hull. This meant that they had been selected by royalty to collect the taxes and dues in the town and also for distributing them. This meant that they had great local power too. Much of the monastic lands in Yorkshire were producing wool and soon William began trading in this most valuable of commodities and soon became very wealthy. Du over Gasconye to his connections he began to loan money to King Edward II to finance his war against the French. Loans of £1000 and £1800 were recorded in 1325. He also financed the rebuilding of Hull;'s fortifications. He also loaned money to Edward III for his war against the Scottish. Loans of £6000 and £18000. He was rewarded with the manor of Myton in 1330, and made the firt mayor of Hull from 1331 to 1335 and represented Hull at the various parliaments through the 1330's. For some reason the business partnership with his eldest brother was dissolved in 1331. He was also procuring  supplies and ships for the King and the Scottish War. Hull was well place for this as it was close enough to be accessible to the 'front' but far enough away so as not to be at risk of  capture.

The King set up the English Wool Company to maximise the tax that could be made from it to finance the Royal wallet and de la Pole was also involved. In 1338/9 William lent the King a further £10000. As can be imagined this was a massive amount of money at the time and gave him great power over the King. He managed to buy the Seigniory of Holderness for £22650 from the King which caused a little resentment. In 1339 he settled a debt for the King where he had used the Crown as collateral! So it could be said that William de la Pole saved the Crown of England. This is maybe why in the same year he was made Knight Banneret and Baron of the Exchequer. This meant that he was the senior judge in fiancial matters and would have given him even more power.

In 1340 the English Wool Company failed and William and Richard de la Pole and others were arrested. William was imprisoned at Devizes Castle and his lands seized. The charges were dropped in 1344, but before this William had already once more set to fund the Kings wars by the foundation of a new company.  All went well until a brief halt in the warring in 1350 when the charges were resurrected and William had to renounce all claims to the Manor of Burstwick and Holderness. He later felt it expedient to cancel all debts owed by the King  in return for a pardon.

In 1350m he had founded a Hospital in Hull called the Maison Dieu. He also obtained a licence to build a religious house but died before it was completed. His son Michael ensure that it was completed and it  became the Charter House and still exists today. He died in June 1366. It is thought that he is buried in Holy Trinity Church in Hull in the 'de la Pole Tomb'. However it is unlikely that it is William or Richard as details of the clothes etc show that it dates from 15 to 20 years after William, the later to die, passed away. It is thought that it could be another wealthy wool merchant who died in 1390 called Richard de Selby.

Detail of the tomb.

The canopied tomb in situe.


He has a statue on Nelson Street near the Pier. The wording on the plinth reads

'Sir William de la Pole, Knight Banneret, First Mayor of Hull 1332 to 1335, An eminent and munificent benefactor, Lord of Myton and Holderness, Baron of the Exchequer, Founder of Charter House Hull, Ancestor of  the Noble Family of Suffolk, He died 22 -Jun-1366.'

The statue sculpted by a Hull sculptor William D. Keyworth in 1879 is in the Gothic Revival style that probable wouldn't go down very well today. It was first placed at the junction of Jameson Street and King Edward  Street before being moved to it's current position in 1920. I wonder why it was made so long after the death of the subject? William de la Pole is perhaps remembered best by the older members of the community as the name of the large 73 Acre farm mental hospital on the outskirts of Hull which was opened in 1883. It was actually named after the farm rather than the person but what connection the farm had to the de la Pole's is not known. The asylums chapel is now the crematorium. 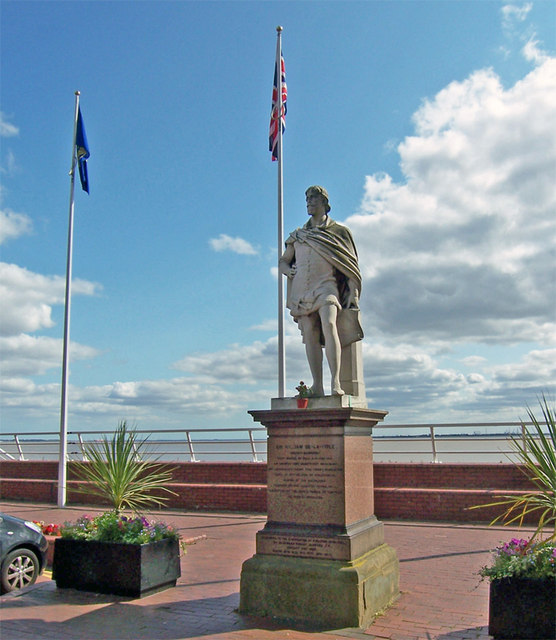