In 1837 the Sailors Orphan Institute in Waterhouse Lane gave clothing  and offered education to orphans of those lost at sea  and on the River Humber from the city and surroundings.

In 1862 the first orphanage was rented in Castle Row to look after that couldn't be cared for in their own home. Then in 1867 this was supplemented by the purchase of Thanet House in Park Street. The purchase was made possible by a major donation from Sir Titus Salt from Saltaire. He was aware of the perils of the work done by seamen to bring him raw materials of cotton etc and also of exporting his finished goods for sale all over the world. He gave almost the total £4500 that were needed. The original building was the centre part in the above photograph, with the sculpture above. It catered for 100 children. With later extensions either side the numbers went up to 150 and then 220.

The sculpture was also paid for by Sir Titus salt and shows Charity surrounded by orphans and with various nautical themes. Sir Titus Salt's arms are also displayed.

By 1893 the property was becoming not fit for purpose so six acres on Cottingham Road were purchased and by 1897 the orphanage had opened there. They became known as Newland Homes as this was what the plot of land was called. Options on more land were also held.

Then idea was to build 'cottage homes' more similar to a normal home rather than massive institutions with large dormitories. The model village had 12 houses on site along with a school and a sanatorium. 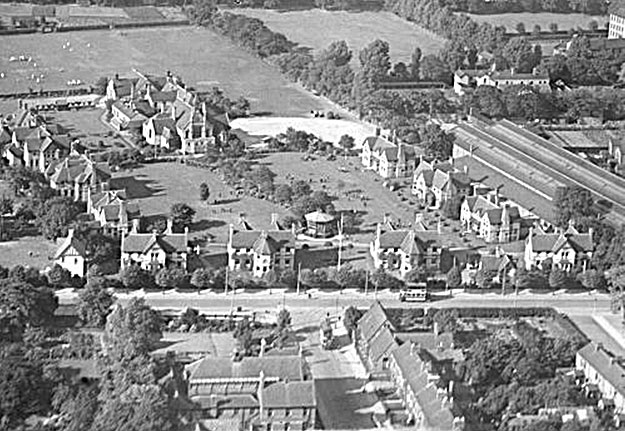 It can be seen that the houses were arranged around a green.

This must be an early photograph as one of the homes is still under construction. The homes were run by a house 'Mother' and assistants. It can be seen that boys and girls were present and they were in uniform.

The twelve homes were named after benefactors, Hannah Pickard, Blackstone Brown, Francis Reckitt, William Richardson, Titus Salt, Dr. Lee and St. Andrews being some of them.

Child care moved towards full adoption and fostering and assistance in their own homes and so the last child left the homes in 2003. The estate had been used by the council to provide residential care for abused children. The site was sold for student accommodation in 2009.

How ever the work continues and the name is now The Sailors' Children's Society and is based at HQS Wellington moored on the Embankment in London. The Patron is HRH The Princess Royal.
Posted by NB Holderness at 13:58