When Humber Dock was built the Act of Parliament allowed for a third dock to be built when trade reached a certain level. A new Act was passed in 1824 and the increased amount of trade was reached in 1825. Construction commenced in 1826. 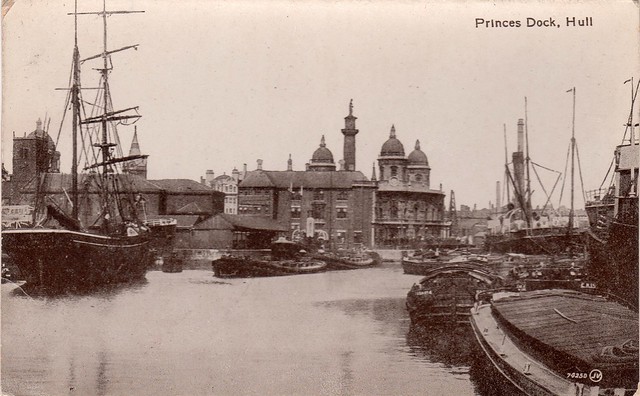 In the centre of the picture is the tall Wilberforce Monument. There are also the three domes of the Dock Offices, now the nautical museum. Beyond the ships on the right is the lock into Queens Dock. The bridge over the lock was called Monument bridge.

Taken from the lock through to Humber Dock.

A similar view with Humber keels in the dock.

The construction roughly followed the old walls of the town and so created an island of the Old Town as there were docks on two side and then the River Hull and the Humber. The dock was designed by James Walker and the resident engineer was John Timperley. The cost was £18600. The dock was built 197m long, 124 wide with an 11m wide lock at each end and a movable bridge over each lock.

In 1855 Queen Victoria and Prince Albert visited the city. At this time The Dock was renamed Queens Dock and Junction Dock was altered to Princes Dock. The dock was in use for 139 years until 1969 when it became redundant. 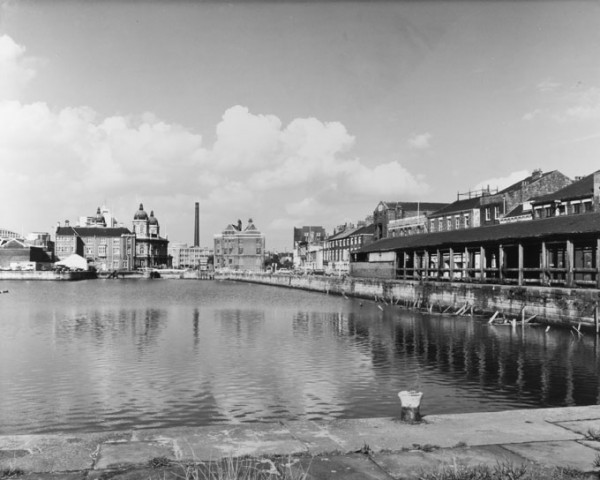 Princes Dock after it was closed in 1969.

In 1991 Princes Quay shopping centre was open to the public. It is built on stilts above the waters of the dock and has three decks and over eighty shop units. Since 1996 the waters surrounding the centre are used to stage and international canoe polo tournament. A local team have been champions three times.