Zachariah was the last but one child of six, three girls and three boys, and was born in August 1821. The family lived on High Street in Hull and as his father's job was given as a merchant this would be a good place to live. In 1825 his mother died giving birth to the last daughter and he was orphaned at 4 years old. He went to live with his uncle Robert Pearson who was a shipbuilder on the north side of the old dock. This may well have been the start of his love affair with the sea and in fact he ran away to sea age 12. He was sent back home straight a way and he continued his education at Hull Grammar School until age 16. After that we was allowed to go sea as an apprentice to Jenkins and Tonge in 1837. He took to the life and soon passed his Master Certificate of Competency  at age 21 in 1842. Two years later he married Mary Ann Coleman and things got more settled as he got command of his own ship in 1847 age 25. He was trading with America, Hamburg and the Baltic. By 1849 he was master of passenger ships sailing from Hull to New York and Quebec. By 1853 he was head of a company Pearson, Coleman and Co owing ships and working as a merchant. They had the contract to run the Royal mail to Australia and New Zealand and traded with Russia and the Baltic.

Zachariah Pearson by and unknown artist painted in 1859 and hanging in the Guildhall.

Pearson loved his town and worked for the betterment of it's position. in 1856 he was elected to the Council and in 1857 became an Alderman. He raised money to restore Holy Trinity Church and traded to provided raw materials for the factories of Hull. In 1858 he became the Sheriff of Hull. Then he was twice made Chief Magistrate in 1859 and 1861. He also became Mayor in 1859. In these years he gave land to provide the first park for the citizens of Hull (see Fact 12), commissioned the first purpose built town hall for hull designed by Cuthbert Brodick and also commissioned a sculpture of Queens Victoria out of white marble.

This is where it all went of the rails for Pearson and his family. He was persuaded to purchase ships from the Overend and Gurney &Co. This was a very big London Bank known as the bankers bank. They had obtained some ships from a Greek shipping company owned by Xenos. He had been unable to obtain credit so the ships were forfeit. This would have been okay if Pearson had had cargoes for them to carry but he didn't. His next big mistake was turning to the high risk venture of  breaking the Union blockade of the Confederate south during the United States civil war. Some may call this greed and some may say that he was trying desperately to secure cotton for the mills in Hull. In Manchester financial assistance was given when the mills closed due to lack of cotton but in Hull there was no help and hundreds were on the streets, destitute. Among his ships were the 'Cherosonese', 'Indian Empire', 'Circassian' and 'Modern Greece'.

The ships were loaded with everything that may be needed by the Confederate Government. This had to be done in secret and using subterfuge to thrown of the agents of the Union side in England, and using agents in Bermuda etc. The idea was to trade the outbound cargo for big profits and purchase a load of cotton to sell in the UK again for big profits. The guns and ammunition would be hidden among the legitimate cargo.

Unfortunately things didn't go well as the ships first had to run the north's blockade. Pearson's ships were just normal trading ships so were deep and slow which meant that they couldn't evade the warships or navigate easily in the coastal shallows and rivers. In the end 'Modern Greece' was intercepted by the USS 'Cambridge' and 'Stars and Stripes'. In trying to avoid the warship 'Modern Greece' gounded on a sand bar and stuck fast. It was within range of a Confederate fort so the ship was not captured by the North. In fact some of the cargo was able to be unloaded. In fact they managed to get 500 of the 2000 Enfield rifles aboard and 4 brass canon that were superior to anything the Confederates had. It meant that they had command of the seas to 5 miles of from the fort with the canon. Plenty of spirits were also liberated from the wreck causing the soldiers to be drunk for a week!

'Modern Greece' aground with troops taking the cargo before it sank into the sands. The wreck was found again in 1962 after a storm and many artifacts were recovered.

This was not the last of his ill luck as another six of his ships were captured by the blockading ships and lost to Pearson. Further bad news was when another of his vessels was destroyed by fire in London. Unfortunately it was just after it left the dock so was uninsured. Further bad news occurred when two ships foundered in the Baltic too. This was just too much for Pearson to bear and despite selling his assets, including his house, he was declared bankrupt in 1862. That year he was once again Mayor of the city and had to resign.

Her soon learned who his friends were and as he was 'new money' the gentry distanced themselves from him and only a few stood by him. At the opening of what became Pearson Park there was no mention of Pearson's donation. The statue could not be paid for but Alderman Moss paid for it and it sits now in Pearson Park. At the opening of the Park he was snubbed and he resigned all his positions and lived a quiet life in a terrace to the NE of Pearson Park. He went to work for his son Charles as a ship's surveyor and never got back to his old standing before he died in 1891 and was buried in Spring Bank Cemetery. In more recent times supporters of the old Confederate states found his grave and planted flags in honour of his attempt to assist their cause. 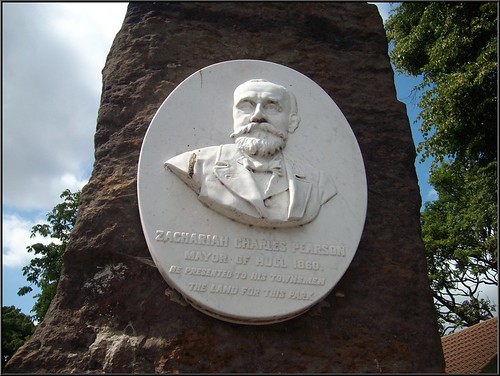 It wasn't until 1897 that Pearson's contribution of the park was recognised and a bust on an ancient rock were placed in the park.

Zachariah Pearson clearly loved the city where he grew up, and his story could have been very different if things had gone for him in the gun running scheme. At his bankruptcy hearing he owed £650000 and the court said that if he had succeeded he would have been the richest ship owner in Britain. If he had made that sort of money it is interesting to think what he may have done for the city!