Fact 65. Hull is twinned with Reykjavik.

Hull is surprisingly twinned with Reykjavik which is the capital of Iceland and the most norther capital of a sovereign state.

I say surprisingly as Hull and other deep sea fishing ports were heavily involved in three 'Cod Wars' with Iceland. The Humber ports and especially Hull have been trading with Iceland for over 500 years and fishing in their waters for nearly 200 years. Iceland was first settled by Norsemen in 870 and a few houses were established around the current area of Reykjavik. It is thought that the population was increased over the years by women kidnapped from the Yorkshire coast so may be some from Hull even then. The names means 'cove of smoke' due to the steam rising from the hot springs etc. Iceland remained a back water run by Denmark until 1752 when the Danish King Frederik gave the area of Reykjavik the the company that he had set to organise the island to produce wool for trade. This became the main trade of the town but there was also fishing, sulphur mining, agriculture and ship building too. Ib 1756 the King gave trading rights to six communities of which Reykjavik was one and the only one to retain the rights continuously. They were only allowed to trade with Danish merchants though until 1880.

In 1845 an advisory body to the King was set up, the Alpingi. This was based in Reykjavik so the town became the de facto capital. Iceland took a further step to independence when they got a constitution in 1874 and home rule in 1904. In 1918 they became a sovereign country under the Danish Crown. At this time the fishing fleet was expanding and mainly sailing from Reykjavik with  salt cod been the main industry. Then the depression struck and great hardships were endured. On 10th April 1940, the day after Germany  had occupied Norway and Denmark, four British warships anchored off Reykjavik and with a few hours Iceland was occupied by the Allies. Frequent requests had been sent to the island to accept occupation but they had wanted to maintain neutrality but they did not oppose the occupation in the end.The occupation was perhaps the salvation of the island and Reykjavik as at the height of the war there were as many Allied troops on Iceland as there were natives. The doubling in population brought construction work and wages to the Icelanders as the British built an aerodrome in Reykjavik that is still today the domestic airport, and the Americans built an airdrome at Keflavik which is still today the international airport. In 1944 Iceland became a fully independent country with a President taking over from the King of Denmark and Rykjavik confirmed as the capital.

After the war the general prosperity of the Icelanders brought a general drift from the land to the city and the city limits expanded and the village atmosphere was lost. About 200,000 live in Greater Reykjavik today which has gown from 8000 in 1901! With the new found confidence of independence and wealth created during the war the Iceland Government wanted to establish them selves economically and settled on fishing to do this quickly. To protect their assets in 1958 they increased their national offshore fishing limit to 12 miles from 4 miles previously. This was seen as wrong by the British and they vowed to send the Royal Navy to protect their fishing fleets right to fish in three guarded areas. They sent 37 warships to protect the trawlers from 6 gunboats. There was much to'ing and fro'ing for two and a half months with ships colliding to warn off ships etc before and agreement was signed that all future disputes would be handled by the International Court of Justice in the Hague.

Things once again came off the rails when Iceland extended her limits  from 12 miles to 50 miles in 1972 and the second Cod War started. Things dragged on for over two years this time with 42 UK government vessels and five tugs, must of which were supplied by United Towing of Hull, protecting the trawlers from 6 small Icelandic vessels. This time the gunboats used the net cutter where they towed a hook across the towing wraps between the trawler and her nets severing the lines and so losing thousands of pounds worth of gear. In the end Britain accepted the new limit in November 1973 in return for an annual catch for the British fleet of 150,000 tonnes of his a year until 1975.

In November 1975 Iceland once again extended their territorial waters but to 200 miles. This gave the British fishing fleet no where to go and the 3rd Cod War was the most hotly contested. Once again the Royal Navy were sent in to project the fishing fleets 29 warships and 6 large fast tugs were employed to try to thwart the Icelandic gun boats from severing the nets and boarding and arresting trawlers. This dragged on until June 1976 but ultimately Britain had to accept the new limit with an agreement for a very small quota for the British fishing boats. This signaled the death of the deep sea fishing fleet from Hull and the mainstay of Hull's economy disappeared almost over night. I suppose that it was in the spirit of rapprochement that the two cities became twinned. Although the fishing industry was lost Icelandic companies have set up in the city and now provide work processing fish, as well as the fish. 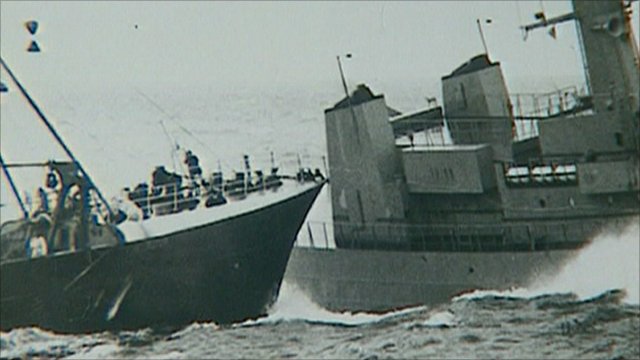 Despite being so far north Reykjavik's climate is not as bad as it may seem. They have about the same hours of sunshine in a  year as Glasgow and it only has precipitation for about 150 days a year. Normal temperatures are between -15 and +15C. Maximums reach about -24 and +26C. This may explain why in January 2009 a big collection of wollens was made in Iceland to send to the UK as there had been a report in the Icelandic media that thousands of old people die each year due to the cold. They collected 3000 woolen jumpers etc and as Reykjavik was twinned with Hull they came here to be distributed.

Reykjavik hit the headlines in 1974 when the  World Chess Championship was staged there between Bobby Fischer and Boris Spassky and again in 1986 when there was a Cold War Summit held in the city between Ronald Reagan the USA President and Mikhail Gorbachev the USSR President. Headlines were also made, but not for a good reason, when Iceland's deregulated banks collapsed and had to be taken over by the state. The economic crisis around the world had made it impossible for them to cover short term loans and they went under. Just before this the nation had been declared the wealthiest per capita in the world. The nation seems to have recovered now and tourism seems to be increasing all the time.

The city is perhaps the greenest in the world too as 90% of all homes and offices are heated by gorthermal power stations. Hot springs, volcanoes and the rugged ice age landscapes are a big attraction. In 2006 as a symbol of the ties between the two cities Icelandic Sculptress Steinnin Thorarisdottir was commissioned and produced two sculptures. The one in Hull called 'Voyage' was installed on the pier staring in the direction of the the route trawlers took to the fishing grounds. At the same time in 2006 at Vik in Iceland another called 'For' was placed looking out to see towards the fishing grounds. 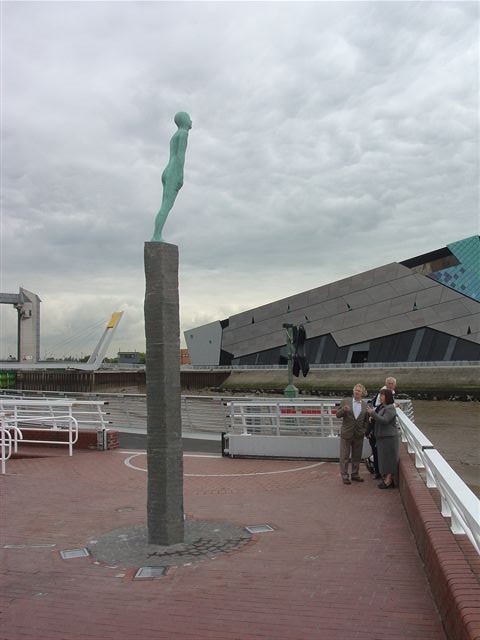 Voyage on the pier at Hull. Brass cast on a basalt plinth. 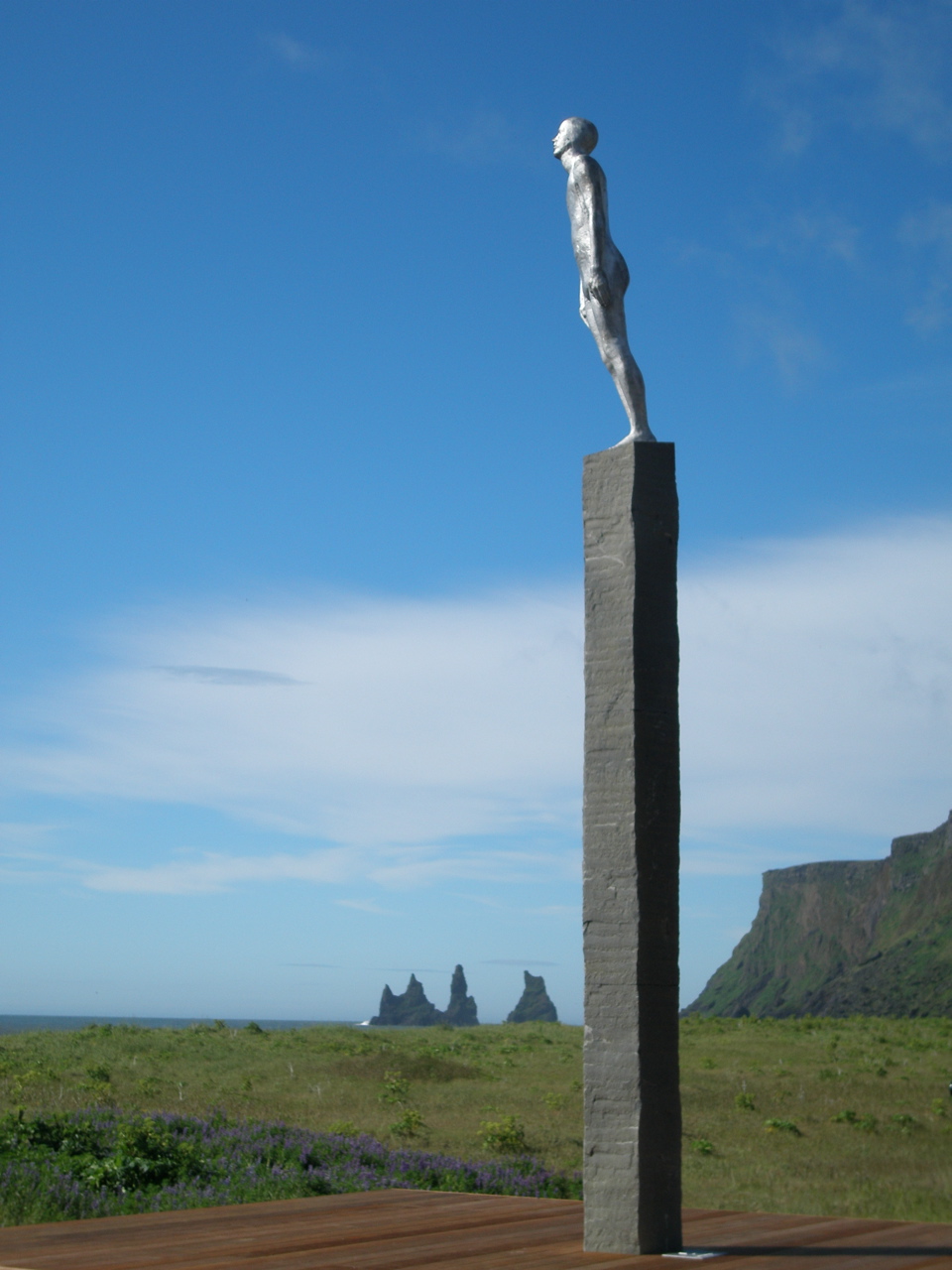 For at Vik in Iceland. Aluminium cast on a basalt plinth.

In 2011 two thieves stole the original brass casting and it was replaced by a duplicate from the original sculptor in 2012. This time further security measures were added.
Posted by NB Holderness at 13:05