As I am sure you will have heard this week is the 50th Anniversary of the death of Sir Winston Churchill and his burial. Much is being made of it in the media and I thought I would put my ten penny worth in to. I remember distinctly sitting and watching the funeral procession and being in floods of tears. I did not live through WWII but my parents had and it was still 'fresh' in the nations collective thoughts. The end of all food rationing had only come about the year before I was born, 1954.

Winston had a very mixed bag of success prior to the war against the Nazi's and their friends that he had been predicting from the political wilderness, but he did seem to believe in his own destiny and as the saying goes 'Cometh the hour, cometh the man'. Somehow Winston, at the age of 65, seemed to relish the challenge of the post he took up. One can only dream of the pressure he must have felt with the weight of the nation, the Commonwealth and the free world during those dark early years of the war. Somehow he managed to present to the public a determined and unassailable faith that it would all be alright in the end. His speeches were an inspiration to the Nation during the war and I must confess to welling up when I hear them still. Sir Winston Churchill was a flawed man in many ways but but who knows where we and the rest of the world would be today if he hadn't stepped into the breech.

The first actual air raid on Hull was 19th/20th June 1940. The main bombings on the city and surroundings occurred in March July and August 1941 when much damage was sustained and many hundreds killed. I intend to write a much more detailed blog about the Hull Blitz at a later date so will not go into detail here. Suffice to say that the city was never referred to by name on the radio, only as  'A North East Coast Town'.

Winston Churchill made several moral boosting trips to the north of the country and visited Hull in November 1941 several months after the serious bombings. He surveyed the damaged areas including the docks and maybe even Hull FC's ground that had been hit. He visited residential areas where he boosted moral with his cheery smile, words of comfort and victory V signs. When touring the docks it is said that a cheeky stevedore  asked for his cigar and Winston chucked his butt to him.

Winston Churchill on walk about in Hull City Centre in November 1941.

Later there was a meeting held at the Guildhall where all walks of life were represented. There were even twelve year old pupils from Trinity House there,

Sir Winston Churchill in Kingston upon Hull's Guildhall making a rallying speech to the people of Hull in November 1941. 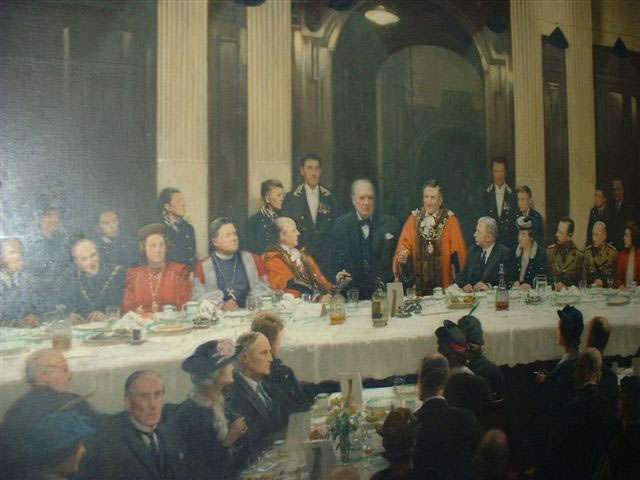 This painting of the war time arrival of  Sir Winston now hangs in the Banqueting Hall of the Guildhall.

Hull had the most serious bomb damage of any town or city in the country, outside of London, for the size of it's population and housing stock. We must give thanks for the fortitude of all the civilians that stood fast through out the war alongside those in the forces and other units.