Fact 52. The world's largest manufacturer of conveyor belting is from Hull.

In June 1861 a 25 year old currier rented a sublet building at 211/2 Bishop Lane in Hull. A currier is a tradesman that following the tanning of a hide, dresses and finishes the leather, and he was called Joseph Henry Fenner. He made all things leather but especially hoses and straps and in 1868 there is an invoice for 50ft of leather house at 2/6p per foot. Business was not easy as there  was a slump in 1866/67 and he went  broke twice. However he made sure that all his debtors were paid and by 1874 his business had expanded such that he had to find bigger premises and moved to Chapel Lane, one street away. By then his main work was supplying leather transmission belts that drove the machines of industry. An advert from 1880's. As can be seen Fenner also made belts from woven hair and walrus hide and seamless woven hoses.

Unfortunately at 50 Joseph died following being thrown from his pony and trap in 1866. His two sons Henry, the elder, and Walter had been working in the business and continued the work.

Blue plaque on the building in Chapel Lane.

The business continued to expand and by 1890 they needed a larger factory so purchased 18 acres of land in village of Marfleet a few miles east of the centre of Hull. By 1893 the factory had started production. The company had built house for it's workers at 3/6p and 5/- out of wages of 25/- and 28/- per week. They were also one of the first palces to have a telephone in Hull. They were given the number 'Hull8'. 1 to 6 were allocated to the telephone company themselves. By WWI they were exporting 70% of their production. The War obviously decimated that market and they were lucky to survive to the end of the Conflict.

By 1920's they moved away from leather belts to woven belting and invested in looms. Then with the coming of machinery being powered by electric motors they started to sell endless rubber V belts that were made by Gilmer Ltd in Philadelphia in UK, South Africa, Australia and New Zealand. Sales continued to grow and in 1936 Fenner built their own factory to make V belts at Marfleet and the first ones came of the line in 1937. They also  started making pulleys at this time. In the same year the Company became a Public Company with a share capital of £250,000. The V belts and pulleys were the mainstay of the business until the 1990's.

In 1940 the Company had moved a lot of it's manufacturing to shadow factories in Heckmondwike and Colne. This proved a wise move as in 1941 the Marfleet factory was badly bombed. The company worked hard for the war effort making military webbing belts, parachute harnesses and over 3 million feet of fire hose. They also supplied the V belts that were used on the 'bouncing bombs that were designed by Barnes Wallis for the Dam Busters Mission.

The bomb had to be spun the opposite way from it's direction of travel so that it did not 'dig in' when bouncing and so cleared the protective nets at the dams. The V belts use can be seen from the motor to axis of the bomb to induce spin.

After the war rebuilding commenced and the company thought of new products such as conveyor belting. Sydney Hainsworth joined Fenner's straight from University in 1921. He was appointed a director in 1930 and in 1945 promoted again to Chairman and was to influence the growth of the company until he retired in 1974 when he was made President. By 1947 Marfleet was back in production and in 1950's factories were opened in India, Australia and South Africa too. In 1950 there was a fatal fire at Creswell Colliery In Nottinghamshire. The fact that the rubber and canvas convey belting caught fire due to friction caused 80 deaths and the National Coal Board asked Fenner to look into a solution to the problem. They developed Fennerplast which is still in production today and is a mainstay. Through to the 1990's the company continued to create new products and buy or merge with other companies so that, along with their v belt and pulley business and the conveyor belting they were handling automotive oil seal, roller and wheel conveyors, high pressure vacuum pumps and electro microscopes among other items. 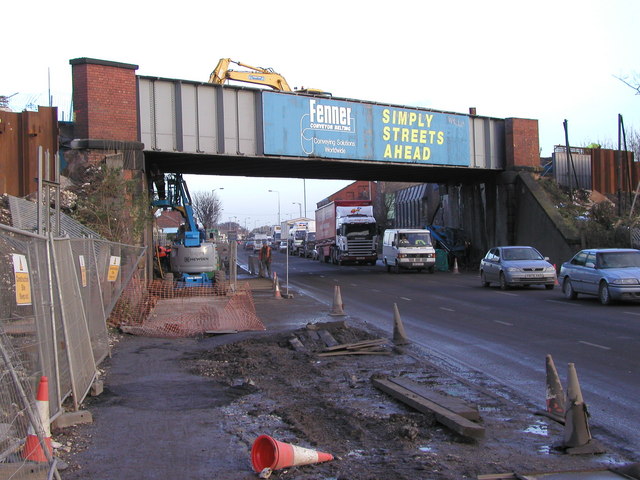 This railway bridge on Hedon Road near Marfleet always reminded me I was close to home until it was changed with the road widening scheme to four lanes in 2003.

In the 1990's the company had a major reorganisation and the change was made from a diverse engineering business to one concentrating  on reinforced polymers. Business were sold and the company was left with no debt. Conveyor belting is still made at Marfleet and 80% of the production is exported. Along with other large plants all over the world Fenner's are the largest manufacturers of conveyor belting in the world. The Registered office is at Hesslewood Hall west of Hull and there are plans for a completely new research centre at Marfleet in the near future. A Hull company conveying goods and driving the world.
Posted by NB Holderness at 14:24