Fact 55. Smith and Nephew medical equipment company is from Hull.

Thomas James Smith was born in 1827 in Whitfield Northumberland, and trained as an pharmacist at a dispensing chemists in Grantham. In 1855 he went on to University College London until 1856 and is said to have studied under Lord Lister who was a pioneer of the use of antiseptics. Following his time in London he bought a chemists shop at 71 Whitefriargate in the old town of Hull. Business most have progressed satisfactorily as he borrowed £500 from his father to convert two nearby houses into a warehouse in 1860. In 1858 he seems to have got into the wholesale trade of cod liver oil, mainly buying from Newfoundland and selling on to hospitals etc. At the end of 1861 he needed still more space so the business moved to North Churchside close to Holy Trinity Church.


In 1880 Thomas bought the buildings on North Churchside with another loan of £500 from his father. Whilst involved in the making bandages and dressings it seems his main business was the wholesale supply of cod liver oil. He made a very successful trip to Norway in a gunboat and came back having bought 750 gallons of cod liver oil. It was much cheaper than the product from Canada and had a much cleaner taste and smell as the solid fat had been processed out of it. By 1875 Thomas was selling over £3000 of cod liver oil to such establishments as Great Ormond Street and Guy's Hospitals. He was refining and blending his own oil to exacting standards and won a gold medal at the International Fisheries Exhibition in 1883. He had given his oil the brand name Paragon and sales had spread as far as far as Egypt.


In 1896 Thomas was 70 years old and in declining health and as he had never married he decided to bring his 22 year old cousin Horatio Nelson Smith into the business and the business became T.J. Smith and Nephew. Horatio was known for his direct and inquisitive manner. Thomas had left his share of the business to his sister Amelia Ann but she wanted no active part so transferred her share to Horatio for an annuity of £260. Only three months later he was dead. Horatio had been apprenticed for six years making drapery and so it seemed he naturally moved to the bandage side of the business. He bought a machine to cut and roll bandages and had traveled to Canada in 1906 and won a contract to supply Canadian hospitals. By 1907 the business required larger buildings once again and they moved to Neptune Street close to Albert Dock to the west of the centre of Hull and they are still there. In 1911 the company signed a contract with the Ottoman/Turkish Government to supply bandages and dressings in the run up to the First Balkan War. When Horatio joined the company they had three employees and on winning this contract the grew to 54 workers. They continued to grew buying out local business competitors and obtaining new businesses such as sanitary towel manufacturers. Days after the outbreak of WWI the company won a contract to supply surgical and field dressings worth £350000 (about £34 million at today's equivalent). By the end of the war they were making dressings for many governments and the American Red Cross plus they were making such things as weapon belts for the British forces. At their peak they had 1200 employees. During the siege of Antwerp the Belgian Army lost all their dressings etc and contracted T.J. Smith and Nephew to replace them as soon as possible. They manged to produce and deliver 10 tons of dressings in five days. 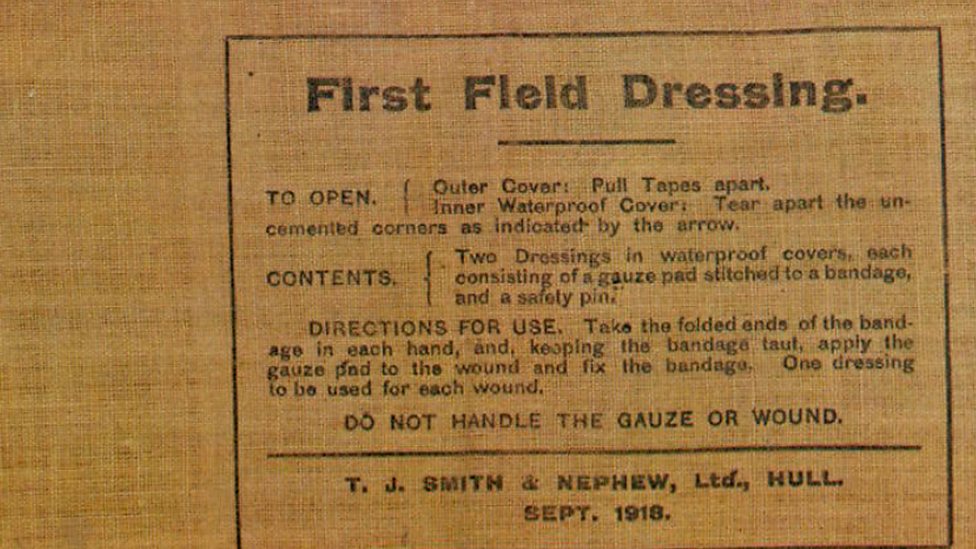 Field dressing pack of WWI and I can confirm that they were still almost identical in 1980's.


After the war trade obviously fell off and numbers of workers reduced to 183. The company ticked along opening a business in Canada in 1921, and then came another break when the British Government brought in to legislation in 1924 that all factories and mines etc had to be supplied with first aid kits and work was found. In 1928 the future was secured when Horatio bought into  the development of an adhesive dressing from Germany that became Elastoplast that is almost the generic term for a plaster in British circles. In 1937 the company was incorporated and became Smith and Nephew.

WWII did the company no harm despite bombing of the factory in Neptune Street and by 1946 they had developed waterproof Elastoplast. By the 1950's they had decided to buy their textiles from the Far East and had started to modernise their processes by introducing one of the first commercially available computers called 'Leo'. 1954 saw them by a company manufacturing hypodermic needles and opening businesses in Australia and New Zealand. Horation Nelson Smith died in 1960. In 1961 Elastoplast had captured three quarters of the market. The business was doing so well that they had to fight off a take over staged by Unilever and they were successful and remain an independent company still in the Stock Market 100 companies list.

The Neptune Street factory as it is today and one of the first things you see when approaching the city from the west and very colourful at night.


Today the company is quoted as having assets of $4.1 billion with 11000 employees in 90 countries. Today they are still in wound dressings, products for surgery and implants such as hip and knee replacement implants and a host of other products in many medical fields. However they do not sell cod liver oil. A truely global company from Hull.
Posted by NB Holderness at 11:24