Fact 56. The largest unspoiled railway station in the UK.

Paragon Station, Hull as it is today. The station opened as Hull Paragon Street and then became Hull Paragon and later just Hull. Most recently it has been known as Paragon Interchange, but on timetables etc it is just known as Hull whilst most locals will call it Paragon Station. 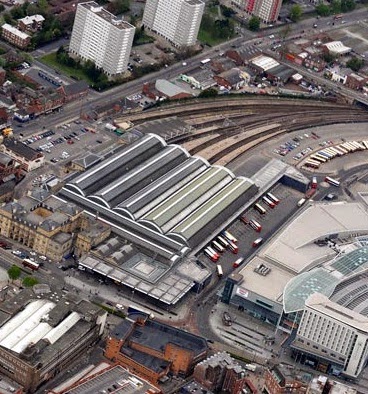 To the right is the new St Stephens Square shopping development. Next to this can be seen the buses using the interchange to thew north of the station complex. The five arched roofs cover the tracks and platforms and the two smaller ones cover the concourse. Next to them can be seen the stone clad Royal Station Hotel and the canopy of the new entrance to the station. Along the top track glass arch can be seen the original station buildings that faced the Anlaby Road. The 1871 emigrant station is the single story brick building to the top of the car park with the separate line to it.

The first station in Hull was built by the Hull and Selby Railway and opened near to Humber and Railway Docks in 1840. (see Fact 47) By 1845 the Hull and Selby had working arrangements with York and North Midland and Manchester and Leeds Railways and in 1846 the Hull and Selby had built a branch line to Bridlington that connected up with the York and North Midland network from a junction at Dairycoates a little to the east of the present Paragon Station. As the town of Hull was developing it made more sense for both companies to create a new station nearer to the town centre. By now the Manchester and Leeds had fallen by the way side. An Act of Parliament was sort in 1847 to allow the building of a new station and the branch lines to connect it. The contracts for it's construction were signed even before the Act had been properly passed. This may indicate the manner of business employed by the Y&NMR at the time.

The York and North Midland Railway had George Hudson as it's Chairman. Hudson was known as the 'Railway King' as he pushed the building of lines and the amalgamation of companies that would pioneer a route from London through to Edinburgh. However he was guilty of sharp financial practices, mainly using capital to pay dividends to shareholders and by 1849 he was made bankrupt and had to flee the country. The main architect for the Y&NMR was George Andrews from his practice in York and were his last major work for them as the work dried up following the disgrace of George Hudson. The Act passed and construction began to an Italian Renaissance style. An hotel was also included in the scheme.

The original station was aligned east/west and fronting on to Anlaby Road. The photograph above shows the original station entrance to the right with the porched front. The eleven bayed one story building fronted onto the platforms and at the end was a two story building that at this end was the Station Master's house. Another eleven bay wing led off to the right and another two story building housed the parcels department. After that was the station hotel. Five tracks and two platforms were train side of the buildings. The original entrance to Hull Paragon Street Station. The large three story building to the right is the Station Hotel. The two story square building is the parcels depot with a wooden covered frontage and the east most eleven bay single story wing leading off to the left. The station was named after Paragon Street that faced the hotel and led into the town centre. The station opened for business on 8th May 1848. The picture is from the early 1900's


The hotel was built in the same style as the station and consisted of nine bays of three stories with a large light well in the middle. The hotel was known as 'Hudson's Folly' as it was felt to be out of scale for the size of the town etc.

The front facade of the Station Hotel with the porch facing east to Paragon Street. It can be seen that the style of the building was the same as the station it's self and the railings and gates were also the same design. The official opening of the hotel was 6th November 1851. The postcard was from the early 1900's.


On 13th October 1853 the Royal Train arrived in Hull for the visit of Queen Elizabeth. The Royal Party consisted of the Queen and Price Albert and five of their children. They stayed in the Station Hotel where a throne room was constructed on the first floor and the party put up on the second. There was a dinner held on 14th October at the hotel.

By the 1870's several new lines had been built using Paragon Station and the national system had been better connected meaning that the general level of use increased greatly. A third platform was added and the platforms lengthened and the cross platform at the foot of the tracks was widened to accommodate more pedestrians. The booking office was moved to the parcel office at the east end so that it led directly onto the cross platform and the parcel depot took over the old booking hall. At this time there was mass emigration from the east of Europe and about 2.2 million of them passed through Hull Station. Partly to ease their flow onto the trains taking them to liners on the west coast and partly to isolate them from the general public a separate station was built to the south west. (see Fact 38). The waiting rooms and line are still there.

By 1902 a major extension was required and land was allocated to the north. At this time the station was run by the North Eastern Railway. Their architect William Bell designed a five arch steel and glass platform roof with a further two arches to cover the concourse across the ends of the tracks. Offices were moved to the east end, next to the hotel, and this included the booking hall. The station approach and entrance was covered with a steel and glass port-cochere. The former offices became waiting rooms etc. The hotel was also extended at this time. There were now 9 platforms to the south, under four of the arches. Under the other were facilities for special cargoes such as horses and cars etc. This was also known as the Fish Platform and was separated off from the others. The newly rebuilt station reopened on 12th December 1904.

On 5th March 1917 the glass roof of the station was blown out during a Zeppelin raid that killed twelve people.

The 1904 station building seen in around 1950's. The Hotel can be seen at the far end and the steel and glass canopy facing Paragon Square can be seen. Just behind is the booking hall and offices and the two arches that cover the concourse can be seen

The original 1904 booking office is still there along with the tiling and 'NER' on the floor.

On Valentine's Day 1927 there was a fatal accident on the approaches to the station when at around 0900 the train from Withernsea collided head on with the train just having left for Scarborough. Twelve were killed and twenty four seriously injured. It was caused by a signaling error when two signalers managed to over ride the safety devices by operating signals too soon.


During an air raid on 7th May 1941 the station was seriously damaged by incendiary bombs and a parachute mine.

In 1962 the old elegant steel and glass canopy was replaced with this office block, Paragon House. For a few years it housed the regional head quarters of British Rail but then was empty and the building became more run down.

This was the concourse in 1979

This is the concourse now, but looking in the opposite direction.


In 1990 the hotel was gutted by fire. It took two years to rebuild and refurbish before it reopened in 1992.
By 2000 there were plans to revive the area around the station with a new shopping area, offices, theatre hotels etc. Part of these plans included a new transport hub to the north of the station. The old fish platform for special freight was used to added an integrated bus interchange with 38 bus gates and 4 coach stops. Large changes took place to the interior and exterior. The Paragon House office block of the 60's was removed and replaced with a glass canopy and the interior spruced up. 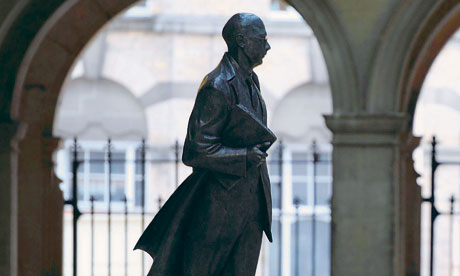 In 2010 a bronze statue of Philip Larkin by Martin Jennings was unveiled on the concourse to mark the 25th anniversary of his death. In 2011 five of his poems were inserted into the floor and in 2012 a memorial bench was added as Larkin has become one of Hull's best known adopted sons.


Paragon Station is often the first impression that people have of Hull. There is now doubt that it now much more positive than in the past. Not only have visitors benefited but locals now have a truly great interchange where over 2.2 million rail passengers a year can make use of the 17000 bus departures a day. The station at Hull is probably the largest unchanged station left in the UK as the lines have not been marred by the introduction of overhead electric cables. This means that it has been used several times in films and television pieces. The line is due to be electrified sometime after 2017, whilst maybe limiting it's use as a film location it will help to make our city more accessible to the rest of the UK and beyond, and hopefully bring many people to see what a great place Hull is.
Posted by NB Holderness at 07:15