The first whaling ship left Hull in 1598 just after Greenland had been discovered. This was mainly along the coast of Scandinavia and initially mainly it was walrus that was taken but whales were caught occasionally. The Dutch were the country must heavily involved and there was much competition for territory in the early days. Svalbard was a main fishing area and hence of competition. Here the various national interests occupied various bays. In those days the walrus and whales were caught and then taken to a beach where the blubber was cut of the carcass and melted down in big pots to reduce it to oil which was put in barrels and then floated out to the whalers anchored in the bays. In 1618 the Kind granted Jan Mayen Island, south of Svalbard as the fishing ground solely for the use of Hull Corporation.

Hull's part in the whaling fishery declined in the 17th century as the English Civil war was taking place and the 'Muscovy' Company of London exerted them selves. By the first half of the 18th Century things were once again starting to pick up with an expedition to the Arctic financed in 1754. The industry really took off when the South Sea Company tried to save their trade. The Government agreed and in 1732 they gave a bounty for whaling ships. This was 20/- per ton of the whaling ship so longs as it and the crew were well found etc. This meant that even if they trip came back with no whales at least some of the expenses would be paid so making the risk much more acceptable. The Government also placed a duty on imported whale oil and baleen so making British whaling more competitive. These measures didn't save the South Sea Company but the Arctic Whale fishery grew. By now the ships were looking at the coast of Greenland. The ships used were wooden commercial vessels of about 200 tons. Normally they would be crewed by about twelve crew but when whaling there would be over fifty aboard. If the ship was under 200 tons it would not be able to carry enough stores out and cargo back or house enough whale boats. Over 400 tons the vessel would be too expensive to fit out. When got ready for whaling the ship had to be strengthened to work in ice. This meant that the hull was doubled in thickness with the addition of extra timbers externally. Internally they would put large beams from side to side of the vessel to prevent crushing stresses. The method of fishing was to carry several small boats that once whales were sighted the small boats would be launched with a crew of about eight. They would be rowed or sailed to get close to the whales where the harpooned would strike into the whale. This was not to kill it outright. The idea was to stay in contact with the whale whilst it dived and tried to swim away. The line man would then pay out the line attached to the harpoon and and lines when required. Eventually the whale would tire and come to the surface. The dangerous part of the operation then occurred as the boat had to go close to the whale and try to kill it using lance between its ribs to try to find its heart. The boats then had to tow the whale tail first back to the mother ship which could be miles away.

The main whale that was hunted was the Bowhead whale. These whale were approx. 20 metres long and weighed around 120 tonnes. They were called Greenland Right whales as they were considered the right whale to catch. This was due to it being quite slow moving and not of an aggressive nature. It also had good quantities of blubber and baleen sheets.

The Bowhead looks a chubby whale so holds much blubber for the whalers. The balleen sheets can be seen it the whales wide mouth. These are used by the whale to filter out its food of krill from the water it swallows.

Whalers would try to stay in groups for mutual support in times of danger from ice and storms and this also helped to thin out the numbers very quickly in small locations.

Hull whaling ships owned by Samuel Standidge in 1769. The ships are 'Berry', 'Britannia' and 'British Queen'.

By the 1800's Hull ships had about 40% of the trade and employed 2000 men. They brought great trade to Hull as the the whale oil was in great demand for lamp oil and for oiling machinery. The baleen was used for anything that today we would use sprung steel or stiff plastic. Things like umbrella struts, corset stays etc. The River Hull was busy with the processing of this cargo. Once the whaling had moved to Greenland the rendering of the blubber had moved from on shore to on the boat. The whales were held alongside and the blubber cut off. Pieces where then placed in big pots that had a fire under them to reduce it to oil. The baleen was cut out and roughly cleaned off and stored aboard. The rest of the carcass was cast adrift. 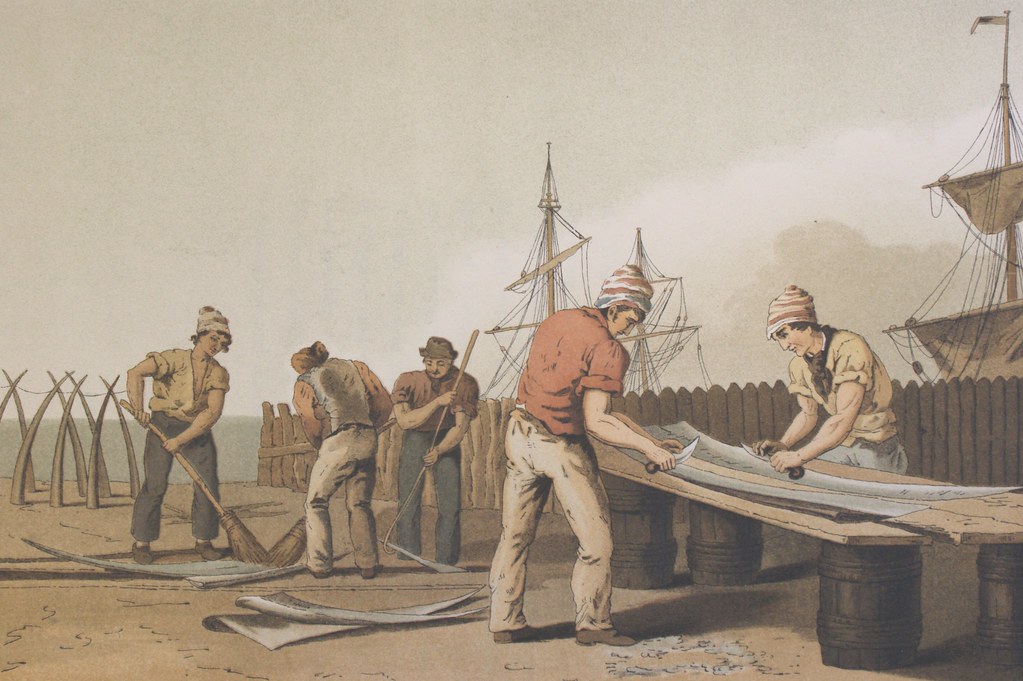 Scrapping the sheets of baleen.

The high point of the Hull trade occurred in 1820 when 62 ships set out from Hull and returned with the products of 688 whales that brought in about £250,000. The smell of the these ships would have been terrible and the whale processing factories where kept well away from 'well to do' housing. In Hull the Greenland Yards were up the River and near to where the Whalebone pub is found today.

In 1821 nine vessels were crushed in the ice and investors withdrew so a third of the remaining fleet were withdrawn Again in 1822 a further six vessels were lost and eight returned with no catch at all. At this time the Government bounty was withdrawn so removing a further incentive to investment. The advancement in science and the discovery of the uses of mineral and vegetable oil meant that the market also reduced for the whale products. In 1868 two vessel left Hull for whaling operations these had been fitted with ancillary steam propulsion to make them more economic. They were the 'Truelove' and the 'Diana'. This was the last time vessels set out and in 1869 'Diana' was lost in a gale near the mouth of the Humber at Donna Nook.

The history of whaling from Hull is well represented at the Hull Docks Museum with exhibits regarding it's history. There are models of the ships and weapons and instruments as well as skeletons of whales and dolphins Polar bear at the museum.

The museum has a world renown collection of scrimshaw that was art performed by the crews of whale ships in their spare time on whale teeth, tusks and bones. The picture was scratched in and then coloured using inks or soot.

There is also a Inuit canoe that was found by the whaler 'Heartsease' in 1613. It also held an exhausted native who once rescued however soon died. The canoe is displayed at the museum but the inuit in it is not real so don't worry. In 1847 the Captain of the 'Truelove brought back to Hull a couple of 'Eskimo's' from Greenland, Uckaluk and Memiadluk. They were inoculated against smallpox but were displayed at various meetings dressed in their seal skins. The idea was to highlight the plight of there way of life. They survived their stay and in 1848 boarded a Scottish whaler to take them home again. Shortly after there was an outbreak of measles and having no resistance the girl, Uckaluk died. Memiadluk survived and returned home with many gifts from his stay in Hull.

Whaling is something that does not take place at all these days but at the time brought prosperity to Hull. It was another industry that Hull excelled at and led the country. A visit to the Hull Docks Museum is well worth it to learn more about this time.