Fact 48. The Football Association was instigated by a man from Hull.

I have just seen the draw for the 3rd Round of the FA Cup was held at The Deep in Hull and the presenter mentioned that the FA owes it's origins to Ebenezer Cobb Morley who was from Hull.

Ebenezer was born in Hull 16-Aug-1831. His father, also Ebenezer, was a Minister or Religion and lived at 10 Garden Square off Princess Street just to the north of the city centre with his wife Hannah Maria. Father was a Minister at Holborn Street and his father had been a Minister at the Hope Street Chapel for just under fifty years. In 1841 they moved Pemberton Street and later to Holborn Place a little to the west of his birth place. Little is known of his time in Hull but he did not attend a public school for his education. In 1852 the whole family moved to Chelsea, London. By 1854 young Ebenezer had qualified as a solicitor. He still held land in Hull though at least until 1876. By 1858 Ebenezer junior had moved to Barnes. He was very sporting and was the founder Captain of Barnes Football club. He also enjoyed rowing and went on to be founder and secretary of the Barnes and Mortlake Regatta and rowed in the London Rowing Club eight at the 1864 Henley Regatta. He also was a keen huntsman and had his own pack of twelve beagles!

Ebenezer Cobb Morley.
(The above photograph may not actually be of E.C. Morley after all).

At this time football was played to many and various rules. The main two were the Cambridge Rules played by the Universities and major schools and many clubs in the south. The Sheffield Rules were played by northern clubs.. In fact when teams played each other it was common to play one half of the game by the first club's rules and the second half by the others! This must have offended the Victorian sense of order of Ebenezer and he wrote a letter to the Bell's Life newspaper regarding the unifying of the rules in a similar to the way the rules of cricket had been unified. Following this a meeting was held at the Freemasons' Tavern in Holborn. It was attended by representatives of  clubs, Barnes, Blackheath, Perceval House, Kensington School, Crystal Palace, The War Office, Forest (later becoming Wanderers), Crusaders, Surbiton, BlackHeath Propietory School and No Names of Kilburn. Charterhouse just sent an observer but did not join. At this meeting it was agreed to form an association with the aim to unify the rules of the game. The rules had been drafted by Ebenezer Morley as he had been voted as Secretary of the new Association. There were 23 Rules. No.9 regarding the running with the ball towards the opponents goal if it had been caught 'on the full' after the first bounce. No. 10 concerned that it would be legal for opponents to hack the front of the legs of a person running with the ball. These two rules were very hotly discussed. One person stated that 'do away with hacking and you will do away with the courage and pluck of the game, and it will bound to bring over a lot of Frenchmen who would beat you with a weeks practice'. This is what football teams looked like in 1863. This is Forest  that soon became Wanderers.

By 8-Dec-1863 the rules had been agreed. F.W. Campbell from Blackheath argued to keep the handling and hacking rules in but lost on a vote 13 to 4. He resigned his club and he and they went on to be founder members of the Rugby Football Union in 1871. The only handling of the ball was when a clean catch was made and a mark could be made when a free kick could be made. This was later dropped but still survives in Rugby Union. There were 13 rules, No.6 being the offside rule stating that when a player touches the ball, any player of his side who is nearer the opponents goal line is out of play. This in effect requires the ball to be passed backwards which is still the case in rugby. Rule 13 stated that projecting nails, iron plates or gutta percha could be worn on the soles or heels of boots! (Gutta percha was the sap from a tree used for many things until plastic and Bakelite came along).

The Association wanted to get going as soon as possible and the first match under the new rules was played on 18-Dec-1863 between Barnes and Richmond and it was a 0-0 draw and Ebenezer played. He also played in the first representative match when a London Clubs team played a Sheffield Clubs representative side on 31- Mar-1866. In 1867 he was appointed as President of the FA. 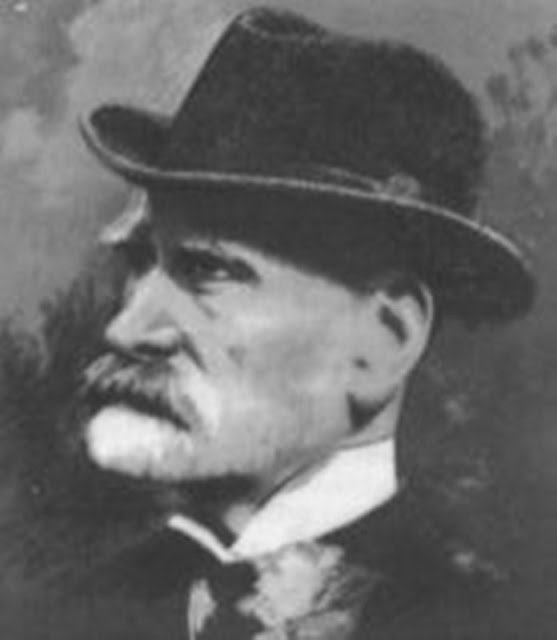 E.C. Morley in later life with a determined jaw.

In October 1869 he found time to marry Frances Bidgood in Pancras but they did not have any children. He went on to sit on the Surrey County Council, become a Justice of the Peace and be a Conservator of Barnes Common along with his association with rowing and hunting. He went on to present the trophy after the first FA Cup final as the President. Wanderers beat the Royal Engineers 1-0 in a match played at the Oval in 1872.

Ebenezer Morley died in Richmond at 93 on 20-Nov-1924. He was Buried in Barnes.
(This photograph is not E.C. Morley but is in fact William McGregor who was the founder of the Football League in 1888 and the first President).

By 2011 the graveyard where he was buried had become abandoned and merged with Barnes Common. Friends of the Common wanted to restore the area but after seeking sponsorship from the local Council and the FA and been denied it fell to a local business man to come up with the cash and propose a scheme to have the grave recognised. By 2013, the 150 anniversary of the founding of the FA, they had been successful and in December of that year Greg Dyke the current chairman of the FA laid a wreath at the grave side.

Greg Dyke, Chairman of the FA, laying a wreath at the grave of E.C. Morley in Barnes on the 150th anniversary of the founding of the FA.

There is nothing in Hull to celebrate this sportsman from Hull who Melvin Bragg reckons Morley's Book of Laws of Football was one of the twelve most influential books ever. Up there with the origin of the species. Football today has become a huge sport and business and he had the foresight to first codify the rules of the game.

A Cottingham school boy Oliver Harsley has started a campaign to have a statue to the man made and placed in Hull. Please contact using Twitter @For Statue and hashtag #StatueForEbenezer and we could could again become focus of the world stage in our small way.