Cities are twinned to stimulate and foster commercial, educational and cultural links and the twinning of Hull with Freetown was instigated by a former High Commissioner of Sierra Leone, Dr. S.T. Matturi who had been educated at Hull University. The twinning was formalised just over 34 years ago on 25th October 1980.

Freetown celebrates its founding in 1787. This is when the British resettled 400 black slaves that had got their freedom at home. An agreement was agreed with the local Chiefs and they founded a settlement called Granville Town after an British abolitionist. The Chiefs hadn't realised that they had ceded their land permanently and burned the settlement down in 1789. The survivours were moved else where in the country.

After the American War of Independence some black slaves fought on the side of the British. They were called the Black Loyalists. As a reward they were freed and re-settled in Nova Scotia. In 1792 the Sierra Leone Company was looking for settlers to move to the Freetown area. In the end they had 1100 recruits from Nova Scotia who had got depressed by the poor weather and the discrimination there. They left in 15 ships. 64 of the settlers died on route. They arrived at the previous settlement that had returned to jungle. The men went ashore to clear the brush and jungle. When they got a big cotton wood tree they stopped and all the men and women paraded from the shore to the tree singing hymns of praise. The town was called Free Town.

The original cotton tree that was the site of the prayers and worship of the  Nova Scotian settlers.

The place survived being sacked by the French in 1794 and by 1798 there were 300 to 400 buildings. By 1800 the settlers were disenchanted as they were being paid in currency that can only be redeemed at the company stores and they hadn't been given the land that had been promised. An uprising was prevent by the arrival of 500 Jamaican Maroons. Some of the Nova Scotian settlers were banished but many returned. Later freed slaves from the West Indies and Africa that had fought for the British against Napoleon were also resettled in the city. In 1808 it became a British Colony.

During the Second World War Freetown was a big convoy assembly point and staging post for the South Atlantic. There was a naval base there and seaplanes were based for convoy protection 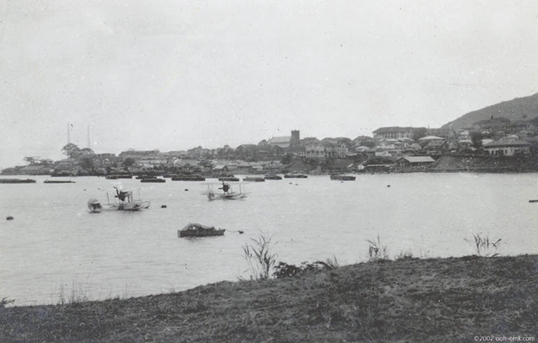 The country of Sierra Leone and the capital city Freetwon were devastated by the civil war that ran from 1991 to 2002. British Forces helped to bring about conditions that led to a peace treaty being signed. It is estimated that 50,000 lost their lives. 70% of the population live below the poverty line and now they have the presence of ebola that is decimating the health and economy of the city.

One of the oldest twinning schemes is that between the Holy Cross Catholic Church in Cottingham with the Church of Our Lady Star of the sea in Juba, a suburb of Freetown. Over 25 years the Cottingham Church has assisted with building a church, school, clinic and bakery. It is by no means one way traffic either as when the Holy Cross church suffered a severe fire following a break in. The people in Freetown sent parcels to assist the church in Hull to get going again. Now the clergy in Hull always wear the vestments that  are sent from Freetown.

At this time of need in Freetown wouldn't it be good if meaningful ties could be set up to enable participation with the year of culture in 2017. They have a very mixed ethnic and tribal culture and must have many dancing, acting and singing and musical groups that could benefit all communities from exposure on a big stage.