The second Friday in October is always the start of Hull Fair. The date is awaited eagerly by all in the area as the Walton Street area by the KC Stadium is taken over by the largest travelling fair in Europe. The fairground trucks can be seen heading to Hull from all over the country and even over on the ferry.

The first charter to grant Hull a fair was in 1278 but it was Edward I that granted a six week fair in May and June in 1293. In those days it was an economic event where trade was done and products bought and sold. By Charles II's time it had moved to 20th September. It was in 1751 when they changed the form of calendar in use that the move to October occurred. This meant that eleven days were lost from the year and there were minor riots in Hull as they thought that their fair may be cut short. The people were placated and the fair was made into a week long event that would start on the Friday that included the 11th October and ended on the following Saturday.

Over the years the fair slowly began to include more entertainment and less trade. By the 18th and 19th Century the shows included jugglers and puppet shows and also wild animal shows where the people of Hull were able to observe beast from far afield. 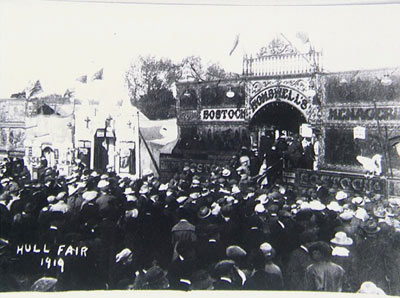 Bostock and Wombwell's travelling menagerie at Hull Fair in 1919.

The fair has moved around the city over the years. In the 1800's it was held in the Wellington, Nelson and Queen Street area near the pier and in the Market Place. It was also held outside the town on the Brown Cow fields before moving to Corporation Fields on Park Street in 1865. The fair continued to grow but it was never popular with the local residents and eventually it moved again to it's present site at Walton Street in 1888. It was originally an 8 acre site but in 1906 it doubled in size making it the largest in Britain.

By the late 1800's mechanisation brought more and more rides to the fair and this continues to be up dated and get faster, higher and more spectacular to this day. In 1908 there were 27 special railway excursions from far and wide bringing 12000 to the festivities. Electricity brought another element to the show and it was called the Light City. In 1919 there were twenty rides and now there are many many more.

Full extent of the site. 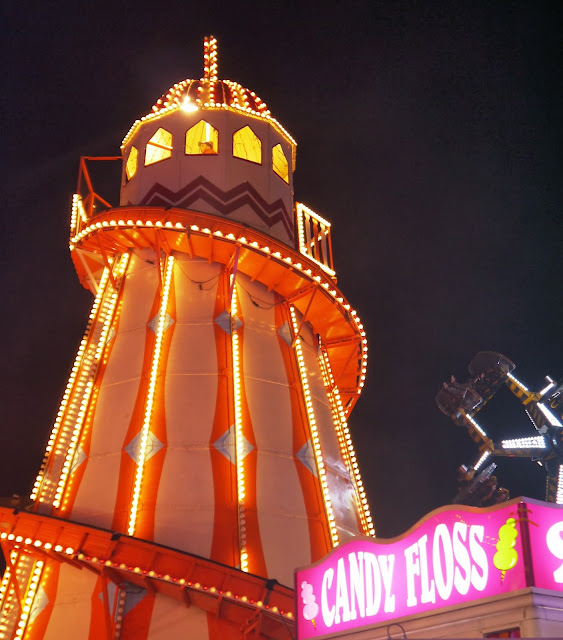 The Starflyer is 70 foot high and must be scary in a high wind.
Posted by NB Holderness at 11:46