Fact 89. A cure for seasickness?

Earle's Shipbuilders in Hull were the constructors of one of the strangest ships ever seen. SS Bessemer was designed by Sir Henry Bessemer, the inventor of the Bessemer process that made steel production quicker, cheaper and easier to manufacture, as well as over a hundred other inventions. Bessemer suffered from severe sea sickness when ever he had to travel by ship. He therefore set his brain to designing a ship that would prevent this. He designed a saloon that was suspended within the hull of a ship on gimbals and was to remain level even when the ship was rolling. He then patented his idea in 1869 and went on to make a working model to fully test his theory. The working model of his great idea.

Once he had proved to himself that the theory was practical he set up a Limited Stock Company called the Saloon Ship Company as the idea was the passenger saloon would be the 'protected' area. £250,000 was raised and he engaged the naval architect Edward Reed to design it for him. As Bessemer was from Sheffield he turned to Yorkshire yard Earle's Shipbuilders in Hull to bring his design to fruition.

© National Maritime Museum, Greenwich, London
This is the SS Bessemer laying off Gravesend on the Thames in 1875. The saloon was beautifully appointed with Morocco leather seats oak paneling and spiral columns with gilt and hand painted panels.

The saloon was suspended on gimbals within the hull and an extra helmsman would watch a spirit level and using an hydraulic system maintain the passenger cabin as close to horizontal as possible. The ship had Earle's yard number of No.197 and was launched on 24th September 1874.

The vessel was to be operated by the London, Chatham and Dover Railway Company that became part of the Southern Railway in 1921. In April 1875 a private trial was undertaken from Dover to Calais. Things didn't go too well and on entering the piers at Calais damage was caused to one of the paddle wheels. This was said to be due to the difficulties of steering the vessel at slow speed. With a paddle basically at every corner in theory it should have been highly maneuverable but then I don't know how they were controlled. It wasn't until 8th May 1875 that the ship had it's first public voyage. However it had the passenger saloon locked in place, so to all intents and purposes it was a 'normal' ship, due to not being able to repair the previous damage in time according to Bessemer! It didn't seem to help as after two attempts to enter Calais breakwater it collided once  more with the pier and demolished part of it this time.

A wood engraved print of the incident  from the London Illustrated News 1875.

This was one incident too many and the first public voyage became the ship's last. Competion on the route was fierce and these early incidents were enough to put off passengers, and more to the point the investors. The Saloon Ship Company was wound up in 1876 and the ship languished in Dover until taken to the breakers, sold for scarp in 1879.

Edward Reed, the naval architect, bought the saloon from the breakers and had it positioned at his home, Hexrable House near Swanley where it became a billiard room. The house later became a Women's Agricultural College and the saloon was recorded once more. 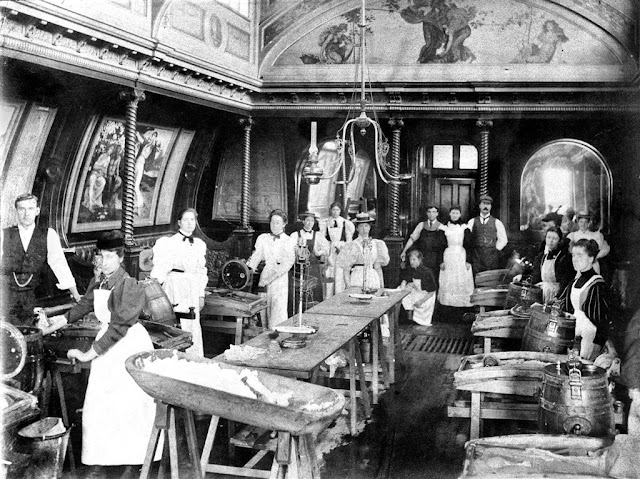 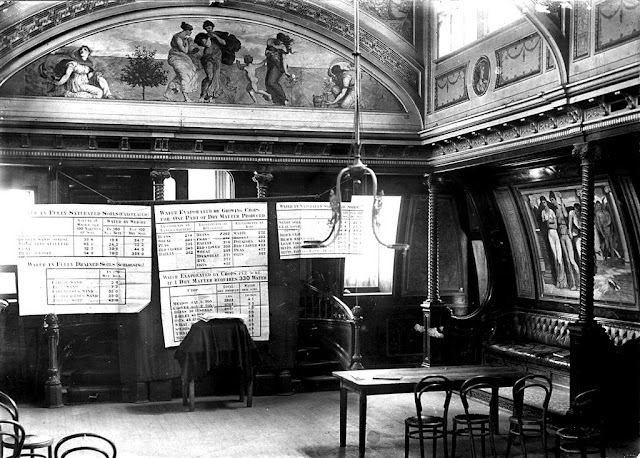 http://jsbookreader.blogspot.co.uk/2008/07/bessemer-saloon-and-other-experimental.html and David Greig.
The upper picture shows a dairy class being given in the Bessemer's swinging saloon at Swanley Agricultural College. The lower picture shows the other end of the saloon at the same time when it was in use as a lecture hall.

Unfortunately the building did not survive a bomb landing on it in WWII! The venture did not have much luck. The Channel crossing is a shallow sea crossing and as such the waves and swell are short and steep which would make it quite difficult to counteract in a timely manner. On a deep sea passage, across the Atlantic perhaps, the swells may be larger but they come at longer intervals and would enable better control of the  hydraulics. In this day and age the whole thing would be automated and I'm sure would be made to work. After all we have trains that tilt when they go round bends. However the prevention of rolling in passenger vessels is now done by computer controlled wings or arms that are extended out of the side of the vessel when underway in deep water and can be contracted into the hull when in confined or sheltered waters. Passive system were water is delayed from 'sloshing' from side to side by damping grids with in an  athwartship tank that dampens the rolling motion.

Earle's Ship yard took on many one of projects that tested the ship builders skills. This one didn't quite come off but some did. Earle's Road is now just about all that remains of the old yard but at the river end you will get a good view of the strange vessels that now service Siemens factory, shapes that would never have been contemplated in 1875.
Posted by NB Holderness at 09:28