With the 'Baby Boomers' of Britain, and the Rest of the World, reaching a certain age many will be fortunate that Christian Langton did not follow his first career plan of becoming a hotel manager, as he went on to develop the bone density scanner that detects bone thinning which is important for older people to try to stay out of hospital following fractures.

He was brought up near Doncaster, and obviously always thought 'out of the box' as he used to breed ornamental pheasants and peacocks in his teens. After A Levels he wished to take a degree that combined chemistry and physics. There were only three such courses in the UK, and Hull was one of them. It wasn't that popular course, as after choosing Hull, he found there were only two of them on the course!

He spent his three years  at Needler Hall of Residence and seems to have contributed fully to student life with concert party appearances, tennis, dorm. raids and I expect he became familiar with Beverley Road and Newland Avenue. However, after witnessing a fellow student being hauled over the coals for a poor chemistry report, he did not neglect his studies.

It was in 1977 at the end of his first year, when his defining moment came, courtesy of his grandmother! On a visit to her orthopedic surgeon, Richard Porter, she asked him if he had any summer jobs for her grandson. Chris. Langton got the job and for the next two summers worked with Richard Porter at Doncaster Hospital assisting with research into back pain. During this work it became clear that the wards were full of ladies with broken hips following falls. The easy fracture was caused by bone wasting called osteoporosis. This bone thinning affects 1 in 3 women, and 1 in 5 men, and the resulting fractures, mainly to hips and wrists following falls, and compression of the spine resulting in old ladies getting shorter and widow's humps, lead to 25% dying within 12 months and 25% of them not being able to live independently again. Chris Langton went to the Applied Physics department at Hull University, Stuart Palmer, and the three of them mulled over the problem whilst he completed his first degree. Following this he went to Aberdeen University for a Masters in Medical Physics. They managed to secure a Medical Research Council grant and three years later produced a prototype scanner. The machine used ultrasound to measure the bone density in a heel bone and so give warning of thinning. He was awarded a Phd. by Hull University for this work.

The prototype was quite clunky as it involved a water bath and two very heavy and expensive components so to develop a more marketable piece of equipment the three of them formed a company called Osteosonics, and with a Danish company, came up with the UBA 1001 (Ulstrasonic Bone Analyser). A fair bit of media attention followed including the BBC science programme 'Tomorrow's World' where presenter Maggie Philbin discovered that she suffered from osteoporosis! The attention also caught the eye of a US company Walker Magnets Group, and a new company was formed, Walker Sonix Inc to develop the idea further. The UK head office was at the Newland Science Park attached to Hull University. In 1989 the UBA 575 was unveiled. 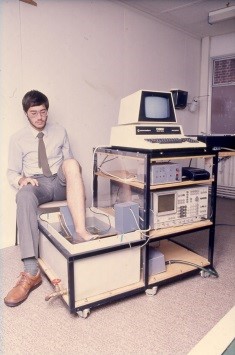 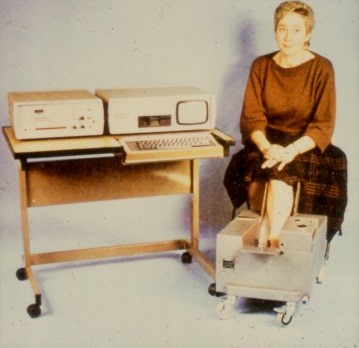 Next came a portable version to use with thorough bred race horses. As these animals would stand still long enough in the scanner a skin contact model was developed that required no water bath. This was then spun out by a company called McCue and Chris Langton. They were trying to have the equipment certified for use in the USA and a bogus patent court case meant that contracts had to be torn up and Mr. Langton made no money. At this time blue prints were stolen and Phd Thesis being copied! Langton has gone on to refine and develop new uses for the system, including a flat bed scanner for newly born babies. In 2007 he was awarded a Doctor of Science degree by Hull University and with it the title of Professor. 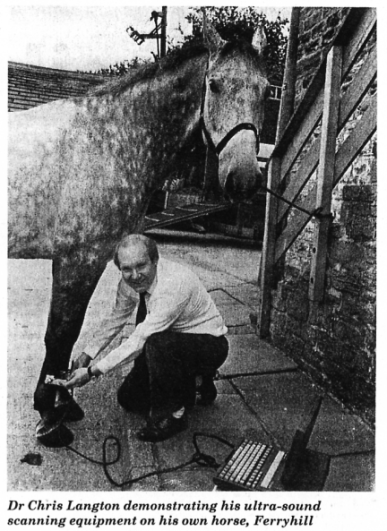 In 2007 he accepted a new challenge and moved to Australia to accept the professorship of Medical Physics at Queensland University of Technology in Brisbane. His now wife and son could not settle so he commutes every three months between the two hemispheres. He is a bit of a petrol head and currently drives a 1976 Porsche 911 Tigra and a Porsche Cayenne.

He continues with his research and development in Australia and returns back home regularly. It must be a great feeling to have an idea and to see it through from design to use and all facilitated by help from Hull University. This is just one field that the University excels at a world class educational establishment and a world class development that has made the world a better place.

https://www.engineersaustralia.org.au/portal/news/member-profile-prof-christian-langton-fieaust
Professor Christian Langford has also been awarded an Honorary Doctorate by the University of Eastern Finland. The very formal ceremony (above) was part of a five day event that includes a ball, a gala, a banquet, procession, church service and cruise! No wonder they are only held every five years.
Posted by NB Holderness at 11:46