Humbrol started out in Kingston upon Hull, or just plain Hull, in 1919, under the name of the Humber Oil Company. It started as a maker of bicycle oil to service the boom in cycling in the flat lands around Hull. By 1935 people had been asking if they would produce a paint for renovating bikes, and this is when they developed their art enamel paint. The paint was only produced in black and was sold in a tin with just enough paint to restore the bike frame and mud guards, so no waste, and cost 6d. Within two years there was a range of 12 colours.

In the 1950's the plastic model kit became popular, especially with young lads, and under Gerald Barton the company changed it's name to Humbrol and started to develop a line of paints to cater for this growing market. The paint was produced in 1/2 oz or 14 ml tins that had the code and the colour inside on the lid. Later the paint was called 'One Hour' paint as it was supposed to dry in that time and the range grew to 50 shades. The paint has also been available in 2 oz (50 ml) and 5 oz (120 ml) and spray cans.

http://www.modelkitcollecting.com/topic1769.html
On the left can be seen a tin of Art Oil paint in a slightly larger tin. This was produced from about 1958/59. The One Hour paints in the slightly smaller tin were introduced in about 1961.

In the late 1960's the company started to produce specifically matched colours to the original colours for the bodies and camouflage of the Luftwaffe, RAF, USAAF etc and also the shades that were matched to the various UK train companies, all to make it easier for modelling enthusiasts.

Mario at http://www.modelkitcollecting.com/topic1481.html
The PL15 display case for Humbrol paints that was found in every model shop.

In 1976 Humbrol was bought by Hobby Products, part of the Borden Inc.. Borden also bought the French model maker, Heller, in 1981, and Airfix models joined the group in 1986. There was a bad fire in the Hedon Road factory in 1986 when an acetone spill ignited and caused the death of a young female employee. By 1994 an Irish investment Group, Allen and McGuire, bought the group and during restructuring sold off the French Heller Co. They then placed Airfix and Humbrol together under the Humbrol name. Heller continued to make models for Hunbrol, so when they went bust, they brought down Humbrol and into administration in 2006. Later that year Hornby Hobbies Ltd. bought parts of the business, and still own them today, although the Hedon Road factory was closed down. Much of production moved to China, but over half has now been brought back to the UK and the Humbrol brand paints are now made in Manchester and London and the range has further extended to 171 shades. 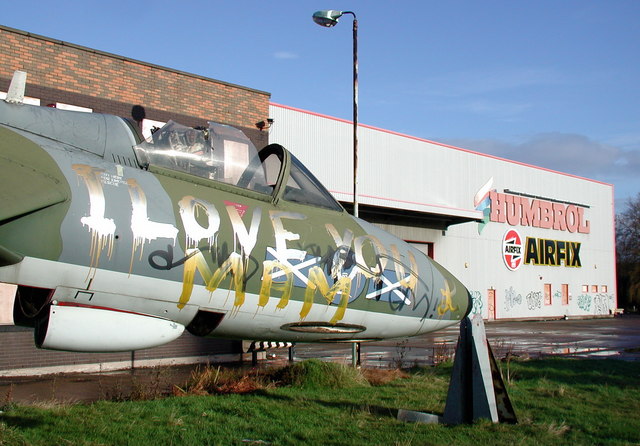 Copyright Paul Gazzard and licenced for reuse under the Creative Commons Licence
The 1957 F6 Hawker Hunter fighter plane X509 had flown for 54 Squadron before being retired and used at the gate of RAF Chivenor. When that base was closed it was removed and restored before being restored by apprentices at BAe Brough and being placed outside the Hedon Road factory of Humbrol. The factory closed in 2006 when the company was sold. This picture was taken in 2007. 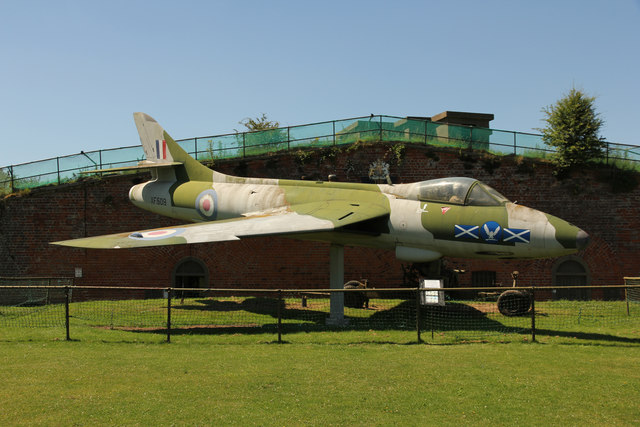 Copyright Paul Croft and licenced for reuse under the Creative Commons Licence
The aeroplane was saved and once again restored before being palced in the saftery of Fort Paull, east of Hull.

Humbrol paints may be gone from Hull, but is not forgotten, as the name lives on and model makers come from every generation. I well remember get a model for Christmas and then later up to the model shop to get any paints that I didn't already have, along with a tube of Britfix polystyrene cement that was also made by Humbrol. It was so difficult to not get it everywhere, especially the cockpit canopies. That was a sign of a real beginner! I hope this Hull  history lesson has brought back some memories for some of you.
Posted by NB Holderness at 11:40