The UK did not enter the very first Eurovision song contest that was held at Lugano in Switzerland in 1956. They did however participate the the following year when it was held in Frankfurt with ten entrants. The UK tune was sung by Patricia Bredin from Hull. She still holds several remarkable records from then. Not only was it the first UK entrant but it was the first entrant sung in English and it is said to still be the shortest song entered at only 1 minute and 52 seconds long. Patti as she was known scored 6 points with 2 from Switzerland and one each from Netherlands, Austria, Luxembourg and Belgium. The winner was the Netherlands with 31 points. The UK were 7th. The UK missed the next year but have participated ever since.

The song was called 'All', music by Reynell Wreford and lyrics by Alan Stanks.

It seems that the song 'All' was chosen following a contest held by the BBC.

Patricia said that she was surprised at the event as other entrants had an entourage of make and hair and costume people and she was just her self and loads of BBC executives!

Patricia Bredin was not really known as a recorded singer, in fact I can only find one other record from 1959 with the songs 'Til the right time comes' and 'I live to love you', but she did sing in musical theatre. She was born in Hull in 1934 and first came to attention when she appeared in a musical 'Free as Air' in 1957 which may have been when she was 'spotted' for what became the Eurovision Song Contest. By 1959 she had appeared in British films. The first was 'Left, Right and Centre' with another Hull born actor Ian Carmichael (see Fact 16.) Also 'The Bridal Path' with Bill Travers and 'Make mine a Million'. This film was with Arthur Askey, Sid James and Bernard Cribbins and she appeared as herself. These parts lead her to be voted one of the promising new stars along with Peter Sellers and Hayley Mills.

In 1960 she had a leading part in 'The Treasures of Monte Cristo' and again with Sid James in 'Desert Mice' where she played an ENSA singer in the desert during WWII. In 1962 she appeared on Broadway when she took over the part in Camelot from Julie Andrews. Then in 1963 she made what I think may have been her last film 'To have and to Hold', a murder mystery.

In 1963 she married the Welsh singer Ivor Emmanuel. He was well know for playing Private Owen in the 1964 film 'Zulu'. It  was he who sand 'Men of Harlech' to rouse the troops. Unfortunately the marriage didn't last and they broke up after two years with not children. Emmanuel went on to appear and host many programmes on Welsh language television and on the stage.

Ivor Emmanuel as Private Owen in the film 'Zulu'.

Patricia Bredin seemed to find love when she married a Canadian businessman Charles MacCulloch in 1979. MacCulloch's was a real rags to riches story. Born in Nova Scotia his first job was as a rock crusher. He went through evening school and eventually earned a degree in Architectural Design. With this he started a building and construction company. By 1937 became the largest shipper of  sawn timber in the Canadian East. The emphasis of his business had shifted by 1956 and was concentrated on buildings supplies and real estate. He managed to buy 100000 acres of timberland around metropolitan Halifax and started a commercial development company. becoming a multimillionaire. They were married in 1979 but tragedy was to strike on their honeymoon on a cruise in the South Pacific when he had a massive heart attack and died aged 67.

Patricia Bredin-MacCulloch, as was now known retired to the family estate and ran the cattle there for a decade and later wrote a book about that period. He was a member of several arts bodies and charities in East Canada and in his youth was a keen sportsman. 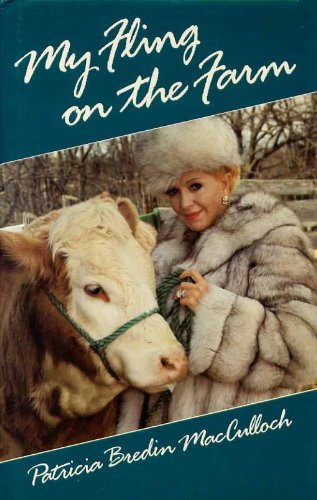 Her book about her time on the farm after the death of her husband.

A few years ago she was coaxed out of retirement aged 73 to help funds for the Scotia Arts Festival were she sang some show tunes to great acclaim. She also donated the piano used at the event.


A real unsung hero of Hull with many 'firsts' in the Eurovision Song Contest to her name.
Posted by NB Holderness at 04:47