Fact 59. First dock to the east was Victoria Dock.

The last of the town docks which followed the old line of the city walls, was Junction Dock that opened in 1825. Trade continued to increase and soon after there was a need for more dock space. By 1838 an independent dock company had come up with a plan to build a dock to the east of the River Hull.They got as far as promoting a bill through Parliament in 1838. The current dock company got interested and the new company withdrew when they also drew up proposals. In 1839 James Walker was engaged to draw up plans and a bill started through Parliament. The plan was to use the dock mainly for the timber trade as this was clogging up the rest of the dock estate and would have more room in a new dock. In 1840 the bill was withdrawn again due to local opposition. By 1844 the dissenters had fallen by the way side and the bill was passed.  At the same time the plan to build Railway dock that extended off Humber dock to the west was passed.

In 1845 construction started and the plan was almost the same as those of James Walker. There was to be a large entrance of 60' from the Humber and a smaller one 45' from the River Hull. Each entrance was to have a half tide basin. Having half tide basin means that although ships can only enter from the river at higher states of the tide vessels can be assembled in the basin and move in and out of the dock at most states of the tide so having craft assembled means that many more can transit the lock when the levels are correct. J.B. Hartley was engaged as the engineer. The foundation stone was laid on 5th November 1845. 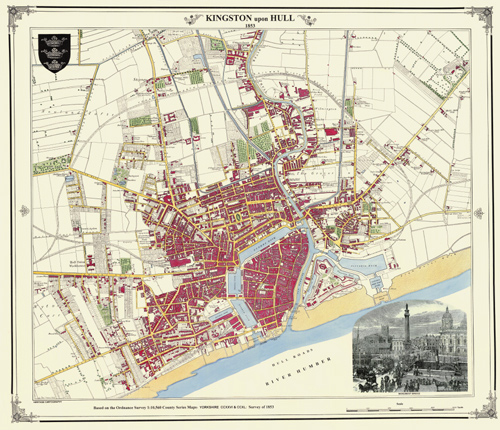 This map of 1853 shows the Town Docks, with Railway Dock completed, along with the original Victoria Dock. The Citadel Fortress can still be seen to the west of the new lock.


The dock was formally opened 3rd July 1850 at a cost of £300000. It was named Victoria Dock in honour of the Queen. The dock itself was 12.8 acres and the half tide basins were 3 and 1 acre. The depth of water held in the dock was between 27.5 and 22 feet at spring and neap tides. It soon became apparent that storage space was required and a timber pond was soon built  to the east of the Humber entrance. Timber was stored wet here to prevent it warping. By 1863 the dock was extended to the east a further 8 acres and another timber pond added further to the east again. No.1 timber pond was extended out into the Humber on reclaimed land and by 1875 No.1 was 14 acres and No.2 8 acres.

In 1864 the Citadel was sold to the Dock Company and demolished to make way for more timber storage on hard standing. Part of the site was taken by Martin Samuelson and Co. for ship building. This later became the Humber Iron Works. The point of land now has the Deep Submarium built on it and is still known as Sammy's Point. To the east C and W Earle had started a shipbuilding operation in 1851. Their first ship, the 'Dido' was launched in 1853 and they went on to build over 700 hundred ships here. (See Fact 46.) An insurance plan of 1893 shows the extent of the dock and timber ponds. It can also be seen that the railway was linked with the dock. On the Humber bank can be seen various berths cut in to the bank that were the building yards. In 1865 South Bridge, or Ha'penny Bridge opened just north of Sammy's Point. It was built to give access for the dock workers. It closed in 1934 and was demolished in 1944 but can be seen on the plan above.


Victoria dock worked other cargoes than timber and in this photo from 1910 can be seen a steel structure that was a coal loading rig that tipped railway wagons of coal into ships from the Yorkshire coalfields. Another cargo was the import of live cattle and to the west of the Humber lock were abattoirs and cold storage for the purpose, along with holding pens etc.

Hull Docks were really busy during WWII and this photo from the Hull Daily Mail archives shows sugar that was stored on Victoria Dock. Prisoners of war were used on the dock. The main cargo worked at the dock was timber and this can be seen on the railway wagons. It was transported as rough cut deals in all sizes. T and loaded on to the boogies for moving to storage areas on the dock.he planks had to be man handled.

In this photo from 1960 the timber is still being carried loose. In the foreground can be seen the boogies waiting their cargo. Each could carry 7 tonnes. Also can bee see trailers with tyres and a bundle of deals coming out of the ships hold slung under the ship's derrick.

All of Hull's docks were frequented by barges and lighters that were loaded to carry cargo up the River Hull to other yards, or up the Trent and Ouse and through the canal system to the final destinations.


In 1964 the entrance to the dock from the River Hull was closed up and the area remodeled. As the size of vessels grew and timber became packaged and dried prior to transport and trade generally fell the dock was found surplus to requirements and finally closed 1st February 1970, 125 after construction had started. In 1988 a housing £63 million scheme was commenced to create an urban village on the dock after filling most of it in. There were thoughts of a marina in the half tide basin from the Humber and a rotating lock gate was installed. Nothing ever came of this and I don't think it has ever been used in anger. There is a trial around the village that shows points of interest that remain including the citadel and dock remains. The village is now complete with school, pub church and shops with a popular promenade alongside the Humber. Sammy's Point is the location of the ever popular Deep Aquarium.