Other than churches The Old Grammar School South Church Side, just by Trinity Square is the oldest. It was built in 1583 as a school. 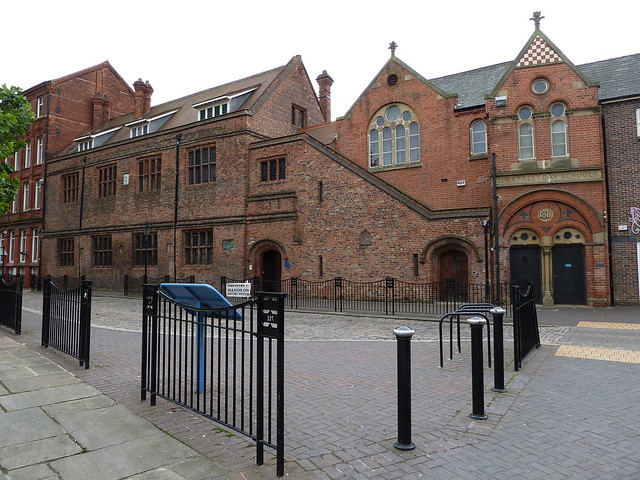 Old Grammar School from Trinity Square. On the right is the Fish Street Day School that was a charity school built in 1871 by the Church of England but was soon taken over as a Board School. The Hands on History Museum extended into this building too.

Hull Grammar School was actually the sevententh oldest independent school in the UK started in 1330. It was endowed in 1486 by Dr. John Alcock who later became the Bishop of Worcester (also Rochester and Ely at different times), then the Lord Chancellor and the founder of Jesus College, Cambridge. The original school was closed down by James VI when he ceased the revenues of charities. The people of Hull did not like this and had the new school built in 1583-5. The cost of the new building was £600. Alderman William Gee was a big benefactor giving £80 and 20,000 bricks plus the income from two properties in Hull. The Corporation also contributed and so a second floor was added this was used as an assembly room and exchange and a meeting place for the Merchant Adventurers of Hull. The second floor remained for other uses until 1706 when the school took it over. The school remained until 1878 when it needed larger premises. The building was then purchased in 1884 to be used as the Holy Trinity Choir School. After this a third floor was added for curates accommodation. Interior whilst a museum.

Whilst the Grammar School was in this location Andrew Marvel, the poet and patriot, and William Wilberforce, the MP and reformer were pupils. In fact Andrew Marvel's father was the head teacher too. There is a Blue Plaque on the wall with information. In 1988 the school became a  Hands on History Museum. It has recently closed as a money saving exercise. 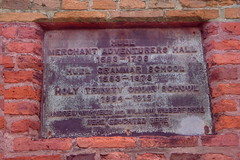 Plaques on the walls of the Old Grammar School.

This is another building that would provide a central venue for recitals, talks and other more intimate occasions during the Year of Culture.
Posted by NB Holderness at 10:00