Fact 28. The most impressive equestrian statue in Britain.

King Billy, as the statue is affectionately know, sits in the centre of the road of Low Gate in Hull. The place was actually where the bear baiting ring was in previous times. The statue is of King William III, William of Orange. Hull was the first large city in Britain to swear their allegiance to the new King when he deposed James II in 1685. This came about as Parliament thought that James was to change the state religion to Catholic and they wanted to remain Protestant. Williams mother, Mary, was daughter of Charles I and then William had married Mary,  his first cousin and eldest surviving daughter of James II, when he was the Duke of York. She was therefore the next in line to the throne after James II. William refused however to be consort to Queen Mary or only as King during her lifetime and threatened to leave the country. Parliament thought it better to have a Protestant King and so it was the connivance of the Houses of Lords and Commons that declared them joint Rulers but William would exercise the regal power for both of them. They were crowned in April 1689. He died in 1702. The statue was paid for by public suscription and cost £785. Today this would be around £150,000. It was designed by a Dutchman Peter Scheemaker in 1734 and sits on a stone pedestal. The Statue is of William in Roman Emperor costume astride a horse. The statue was gilded in 1768. The Inscription reads; " This statue was erected in the year 1734 to the memory of King William Third. Our Great Deliverer."

Statue of King Billy in Low Gate in late 1800's as there are no toilets but the fountain and lamps are there.

The inscription on the plinth with the water fountain below that no longer is working.

In 1880 a plain drinking fountain was added to the plinth below the inscription and in the late 1800's the four lamps were added at the corners of the plinth. These were made by local firm King and Peach.

Details of horse and rider. 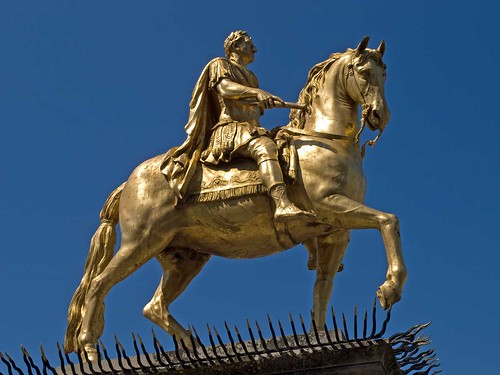 In the Victorian era some public conveniences were built below the statue. They were very ornate and had glass cisterns. I always thought they should have had gold fish in.


It was the only piece of public art in Hull to removed to safety for the Second World War and it was taken to Sancton near Market Weighton. It was reinstated in 1948

The statue being transported back to Low Gate.


There are several myths concerning the statue. The first is that Scheemaker committed suicide when he realised that he had forgotten the stirups but in fact as he is depicted as a Roman they didn't have stirrups at the time. It is also said that when the clock of Holy Trinity strikes midnight King Billy gets off his horse and goes for a drink in the nearby pub. It is also said that when it strikes thirteen the horse also get down for a pint!
Posted by NB Holderness at 13:02