Hull has a unique trail around the 'Old Town' that is marked by forty one sculptures of fish with every letter of the alphabet covered by their initials.

The Hull Fish Trail was opened in 1992, designed by Gordon Young and was sponsored by Seven Seas that started as the British Cod Liver Oil Producers Company in Hull.  Gordon Young was born in Carlisle and was the curator of the Yorkshire Sculpture Park and a Director of the Welsh Sculpture Trust before becoming a full time artist concentrating on public art in 1984. The Fish Trail was his first large scale work (pardon the pun) but since then he was completed many works including the Eric Morcambe Memorial area in Morcambe in 1999, Listening Stones at GCHQ at Cheltenham in 2004 and the Ring of Steel at MK Stadium Milton Keynes.

Cod cast in bronze and chrome and set in Carrara Marble

The A to Z of fish is represented by a sculpture that when followed takes you round the sights of the Old Town and guide you around the significant areas. Each of the sculptures are life size ranging from tiny anchovy to 10 ft rays. The sculptures also display Gordon Young's sense of humour as there is a Plaice outside the Market Place, and Electic Eel by an electric sub station and a shark outside a bank! 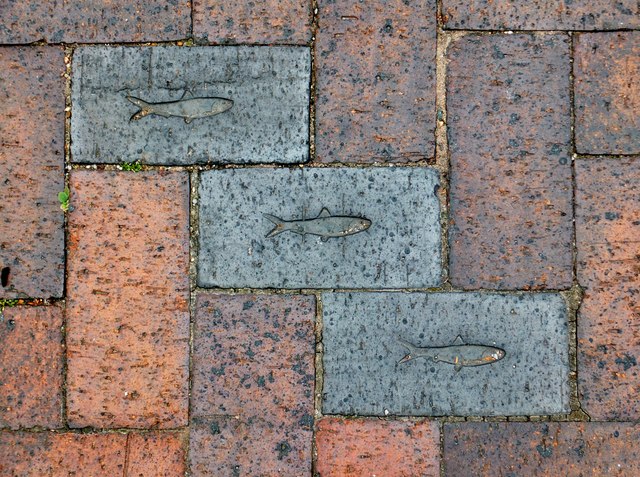 There is now a cost of 40p for the leaflet and 400,000 have taken up the challenge of completing the trail and obtaining a certificate for their completion. Equipment for taking rubbings of the fish can be obtained with the leaflet from the Tourist Information.