Hull's first port is called the Old Harbour or the Haven. It stretches from it's meeting at Sammy's Point where The Deep Aquarium has been built to North Bridge along the River Hull and is roughly where the defensive wall of the Hull Citadel had been. This is the stretch of water roughly 900m long and about 50m wide which really caused the City of Hull to be developed as the the Monks of Meaux used the river to export there wool. The stretch of water provided shelter from the weather and tides and also from marauding Danes and pirates and gave a place where the cargoes could be discharged and loaded from the shore. Map of Hull showing the limit of the Old Harbour between the Humber and the first bridge to the left. The main wharves were on the west bank where the vessels could be worked directly to and from the dwelling warehouses on High Street but there were also wharves or Staithes on the east bank too.
Plan was drawn by Wensceslas Hollar, 1660 to 1677.

Trade grew and vessels got larger and chaos was said to ensue. It could take over twenty tides to get from the entrance to the northern most staithe. It was also recorded that a vessel could leave Hull and sail to a Baltic port, load a cargo and return to Hull and a ship that had just anchored off Hull would still be waiting to enter the Old Harbour. Earlier in 1541, when there was very little regulation, and incident occurred that led to the formation of a pilotage service of some sort on the River. King Henry VIII was visiting the Citadel and its garrison at Hull when he witnessed a foreign owned vessel making it's entrance to the Old Harbour. It caused lots of damage to the quays and other vessels. The King ordered it to be removed and from then on a group of local seaman had to pilot foreign owned vessels into the Old Harbour. The vessel was Scottish owned, and maybe they will be foreign owned ships again in the near future! Entering and moving about the Old Harbour were not made safer or easier by the fact of the very strong currents, especially ebb currents. The rise and fall of the tide could be as much as 6.7m on a spring tide, and with the congestion there would be very little room for error. In the past a chain had been stretched across the mouth of the river and a charge taken to pass. I assume that the 'toll' was to pay for the upkeep of the harbour. To assist vessel to enter and leave two mooring dolphins were erected at the mouth so that ropes could be passed to warp the vessels in. Similarly buoys were placed to assist in the movement of the ships.

Drydocks and ship builders were found at Sammy's Point and further up between Drypool and North Bridges. 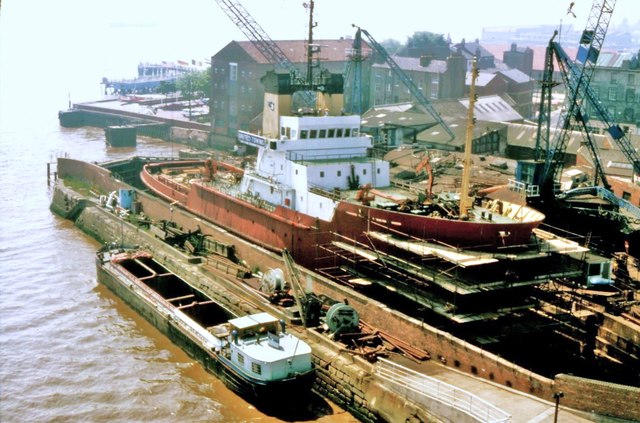 Central Dry Dock, at the mouth of the Old Harbour. The vessel undergoing the maintenance in 'Salvageman' which belonged to United Towing, a Hull towing and salvage company. When built in 1980 she was the most powerful tug in the world. The dry dock was opened in 1784 and is a Grade II listed building. There are some plans to make it an auditorium in the future.
Photograph by Bernard Sharp.

The writing was on the wall for the Old Harbour as trade grew and the vessel got larger. The main factor was however that as the staithes on the river were not enclosed and regulated it was  impossible for the Customs mean to collect the correct duty on goods coming in and out of the port. Bewteen 1775 and 1778 an enclosed dock was built off the Old Harbour following the line of the City wall that led to the west and trade spread into the new facility.

How the Old Harbour did not die and as the ships got larger and larger and more and more enclosed docks were built the the cargoes were transported from the large vessels in to barges for transport up the Old Harbour and indeed around the larger area to Leeds, Sheffield, Nottingham etc via barges and lighters. Originally sailing vessels then late some motorised and some being towed. The Old Harbour became full and bust once again.

A very full Old Harbour with motorised barges and lighters. I suspect this was a weekend with no activity visible. A view looking north towards Drypool Bridge. I would say in 1960's 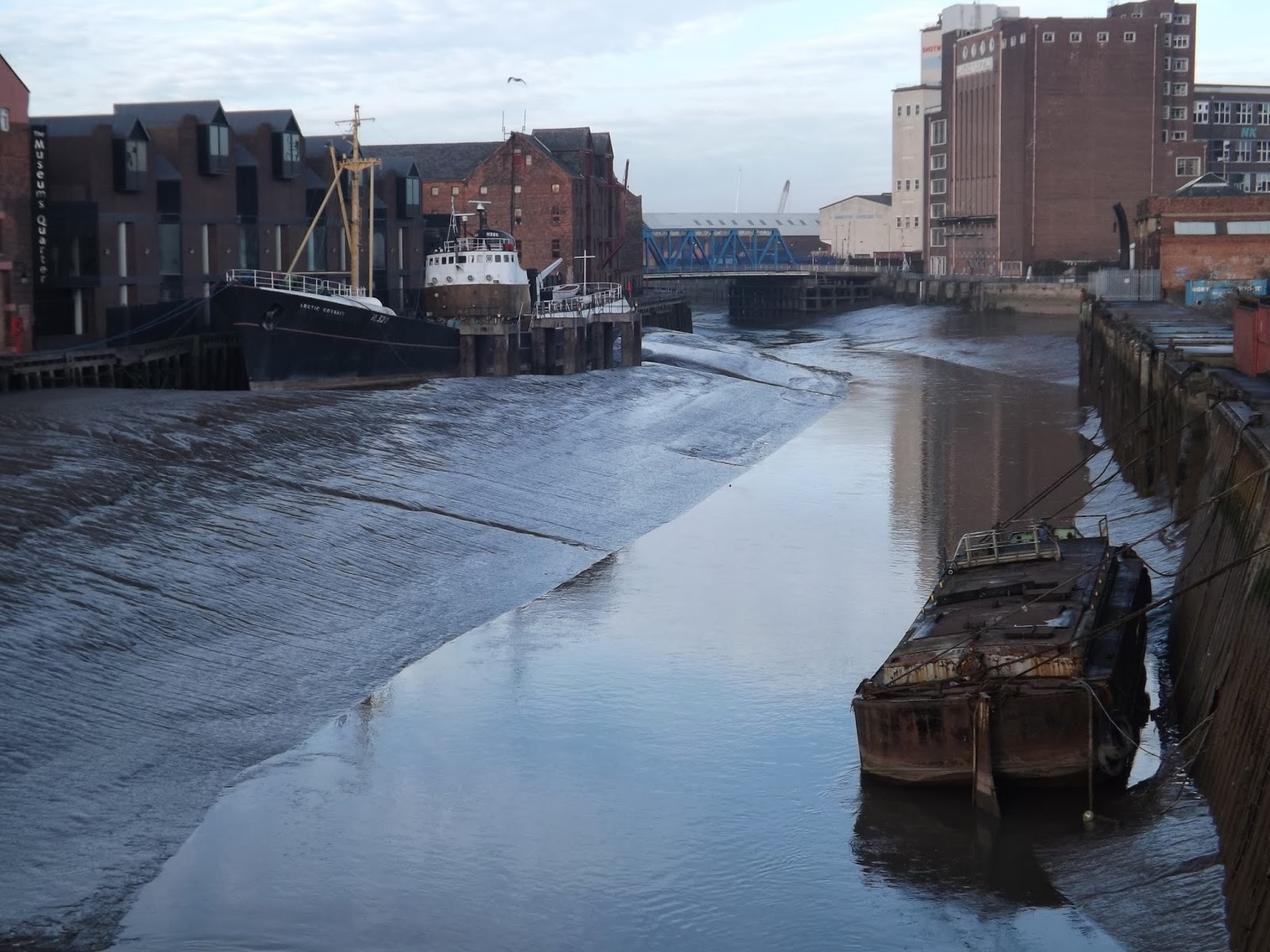 A similar view today with the Arctic Corsair moored outside the museum.

A view of the North end of Old Harbour, between Drypool Bridge at the bottom and North bridge at the top. Taken from the top of Rank's mill. I would say this was also taken in the 1960's. 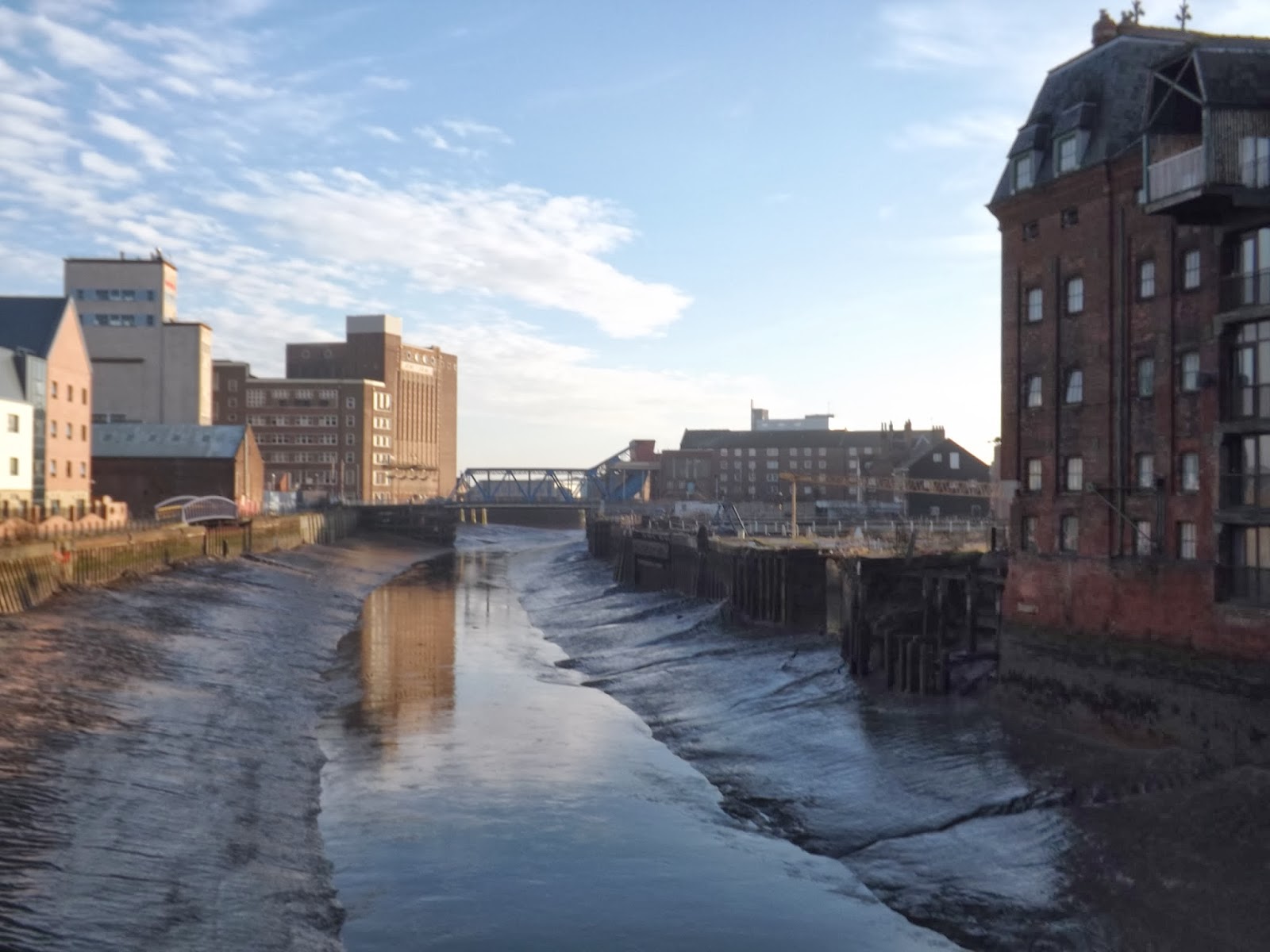 A modern view looking in the opposite direction, towards Drypool Bridge and Rank's Mill. The dry docks and Queens Dock entrance can be seen on the right.

As can be seen for the modern photographs above the lack of use has added to the problem of the Harbour silting up. It does not look it's most attractive when the tide is out and all the mud is revealed. there have been suggestions that a lock be placed at the mouth to maintain water levels but this would cause more silting and as there is a legal right of navigation all bridges etc  have to be such that they do not restrict that right. It is hoped that the mainly derelict industrial buildings along the river will be adapted for new uses and the area brought back to use to give more years to this area that has been active for over eight hundred years.