Hardly known at all, but born in Hull four months before the much venerated Amy Johnson Dorothy Mackaill went on to carve a career in one of the toughest industries, film.

Dorothy was born 4th March 1903 probably, at 15 Newstead Street, Princess Avenue in Hull where the family were living at  the time of the 1911 census. Her Father, John, had been born in Leeds, in 1874, but seems to have come to Hull aged 16, to 39 Brook Street, near the Infirmary which is where the Prospect Centre is now, to live with his Uncle, also John. The uncle was a Grocers outfitter and commissary. With him was his one year younger brother, Thomas. John junior was a grocers assistant and Thomas was the errand boy. By 1901 he had married Florry Wise, or Florence more properly, or usually called just Flo. She was from Northampton, and they were now living at 5 Blucher Terrace, Waterloo Street that was to the north of the city. They had their own house and their neighbours were lighter and rully men. His trade is given as a grocers manager, but Flo had no profession so they must have been doing okay. In the 1911 census John is said to be a Grocers Manager for the Maypole Butter Company as a Maypole and Tea Dealer.

Newstead Street in 1975, by Stuart Cook

Maypole Dairy started in 1887 when three brothers of the Watson family set up a margarine business in Wolverhampton. By 1898 Maypole were the largest sellers of margarine in the UK. In that year they merged with George Jackson's Dairy business. The Watson's had all been apprentices to Mr. Jackson. The dairy business were the largest retailers of butter in the world at that time. The had 185 shops and 17 creameries between them. All employees were included in a profit sharing scheme. By 1908 they had 506 shops and were the largest vendor of tea, butter and margarine. The company continued to grow until after WWII when Unilever absorbed them. The Maypole trade name is owned by Morrisons Supermarkets though.

In his spare time John ran a dance studio and Florence loved the theatre so her head was full of the stage life from an early age. In fact she was teaching at her Father's dance school when she was only 10.She attended Thoresby Primary School. In 1914 her parents split up but Dorothy stayed with her Father. It seems that he had a string of housekeepers to look after his house and his children Dorothy and Thomas and finally married the ninth applicant in around 1921, an Amy F. Stephenson. Before this Dorothy had decided that a life on stage was for her and as a rebellious lass she left for London to seek her fortune. She didn't make the big time straight away and eked a living with little walk on and bit parts along with parts in the chorus with show girl troupes. It was not enough to keep body and soul together so she contacted her father. Despite him not being over enamoured by her career choice he saw that she was determined and paid her board and lodgings for her, along with acting lessons. In 1920 she made her first un-credited film 'Face in the Window' in England. She then moved to Paris and was 'spotted' by a Broadway stage choreographer who told her he could get her work in America. So of she went on found work with in the chorus of the long running Century Revue variety show. at this time, about 1921 she was also appearing in several short comedy films made in New York, called the 'Torchy' series. A little later she joined the Ziegfeld Midnight Frolic revue and when dancing her she made life long friends of Marion Davis and  Nita Naldi.

Stage ensemble from the Midnight Frolic with Will Rogers (center), 1917. From the Theater Collection. Museum of the City of New York, 74.92.51.

She was eventually spotted and signed up to Associated First National Films and headed to California. In 1921 she made 'Bits of Life' with Lon Chaney and continued regularly making films until her first star billing came in 1924 when she was the leading lady in 'The Man who Came Back'. She always had invites to social events through her friend from the Chorus line. Marion Davis was lover to William Randolph Hearst the Millionaire, and Nita Naldi was friends with Rudolph Valentino and his wife and both were appearing in films too. In 1924 she was voted a 'Baby Star' by the Western Association of Motion Picture Advertisers of America.

Dorothy Mackaill, from “What Do They Have to Give Us?”  by Gladys Hall, Motion Picture Magazine, January 1924. 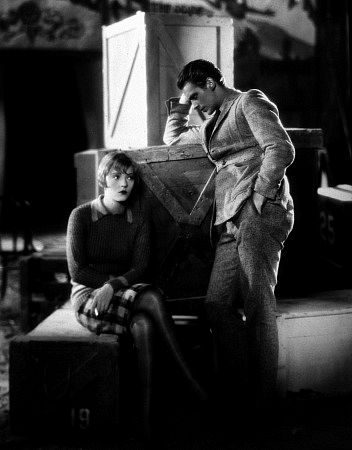 photo courtesy of mptvimmages.com
Dorothy with Douglas Fairbanks Jr in 'The Barker' 1928.

When she first arrived in America she  still had a strong 'Hull' accent, so it was perhaps just as well that this was the silent movie age as she was always depicted as an 'all American girl'. By the time she made her first 'talkie', or actually part 'Talkie' she had lost her accent completely. This was the film in 1928 called 'The Barker'. In that year First National Films was bought by Warner Brothers and Dorothy's contract was not renewed. In 1931 New Movie Magazine said she was the richest women in Hollywood. She did go on to make many films for other studios. In 1932 she starred in the Columbia Pictures with Humphrey Bogart playing his first leading man role opposite her. Her best roles were light comedies and romances. Her last film was made in the UK 'Bulldog Drummond at Bay' and after this she retired. She had  invested her earning wisely in Los Angeles property and so was able to live well off the proceeds. 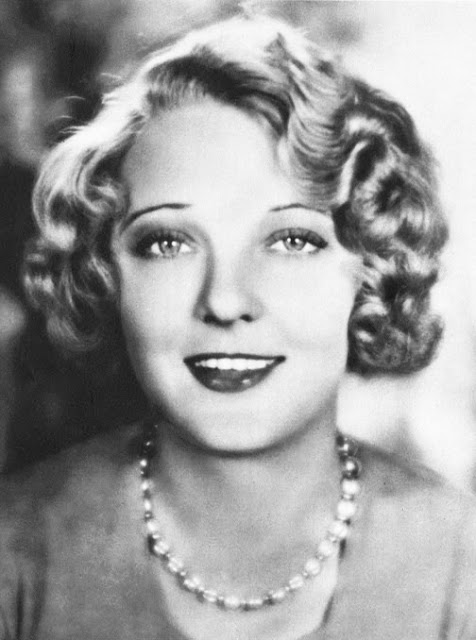 Once she retired she looked after her mother Florry until she died. She fell in love with Hawaii when making a film there in 1929. She bought a place there in 1934 and moved there permanently when her mother died in 1955. Her father died in 1959 and left £11400 but as the executor was the Bank I think his wife was dead or divorced. He was living at 83 Claremont Avenue when he passed away. http://www.filmnoirblonde.com/colcoa-french-fest-opens-and-noir-city-hollywood-closes/
Dorothy appearing in 'Safe in Hell' of 1931.

Dorothy married three times, none of them lasting very long. Her first husband was a German film director, Lother Mendes between 1926 and 1928. Her second was the radio singer Neil Albert Miller from 1931 to 34 and the last, an orchid grower, Harold Patterson from 1947 to 1948. She had no children with any of her husbands. She moved to Hawaii permanently in 1955 and lived at the Royal Hawaiian Hotel off Waikiki Beach doing publicity and guest celebrity. She spent her time playing Gin Rummy, sun bathing and swimming in the sea every day. She was coaxed out of retirement to appear in two episodes of Hawaii Five O in 1976 and 1980, but mainly enjoyed her retirement in Room 253. Towards her end she decided not to continue treatment for her kidney problem and died peacefully in her room at the hotel on 12th August 1990. Her ashes were scattered off Waikiki Beach were she swam almost every day until near to her death.

http://immortalephemera.com/25159/dorothy-mackaill-hawaii-five-o/
Dorothy in her last appearance on the small screen in the Episode of Hawaii Five O 'School for Assasins' in 1980.

Dorothy made 66 films of which 26 were 'talkies'. She is much better known in America than in the UK. She returned to Hull only twice, once in the 1930's when she was at the height of her fame and she was mobbed where ever she went. She also returned in the 1940's when she toured many dance and stage schools passing on to the young that they too could follow their dreams. She may well have loved to take part in this years City of Culture if she was still here as she followed her dream.

I forgot to add that she was finally officialy remembered in Hull when a Heritage Blue Plaque was unveiled by a local Ward Councilloron. On 10th July 2015 the plaque was proudly displayed on Thoresby Primary School where she had attended when living in Newstead Street.
Posted by NB Holderness at 14:47