The full name of the church is St Mary's the Virgin, Lowgate, and it is the oldest church in Hull. It is first in the records as a Chapel of Ease connected to The Priory at North Ferriby in 1327. By 1333  the chapel received a licence from Archbishop Myton that permitted services to be held so that in all but a name it was now a Church, despite being known as the 'Chapel of the Blessed St. Mary'. The clergy for the 'church' were provided by the Ferriby Chapel up to the Dissolution under Henry VIII. The Church may have been much larger than the present one as it had five altars and five guilds attached to it. There is a story that HenryVIII had it all pulled down other, than the eastern end, and used the bricks to rebuild the manor house and erect the Garrison that he had built on the east bank of the River Hull. This is probably not true as parts of the building there today are dated prior to this. It maybe that the story came about as the tower may have collapsed in 1518. 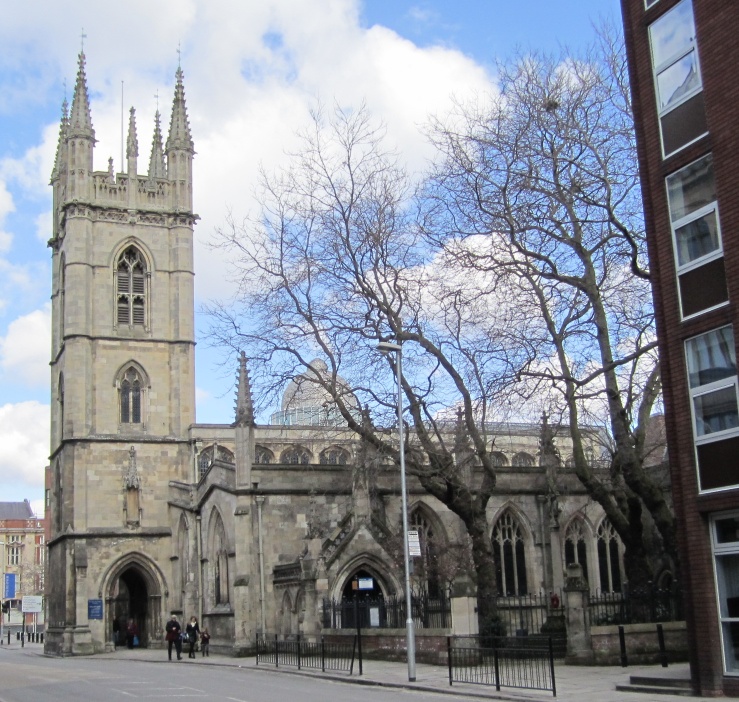 There is little evidence of work carried out in the Elizabethan era, but afterwards periodic activity is evidenced, with a new tower being built in 1697. The building fabric was of brick with stone facing. During the 17th and 18th century most of the work seems to have been carried out on the interior with the site of the altar changing, new chandeliers, lofts and galleries increasing the capacity and removing the rood screen.

In 1826 the church and tower had the battlements removed and the tower covered in Roman Cement that was made by local company Earle's. Later in the 19th century a lot of work was done to bring the church to Victorian 'standards'. The tower was heightened, and opened to allow the pavement through it. The galleries were removed, and the whole church covered in ashlar and another south isle added to compensate for the loss of the galleries.

https://commons.wikimedia.org/wiki/File:065-SFEC-HULL-20070329-ST_MARYS_LOWGATE.JPG
St Mary's Church yard looking north, with the south porch and aisle that was added in the 1860's by Sir Gilbert Scott. The monument is the WWI war memorial erected in 1920.

In 1801 John Scott I was the lecturer at Holy Trinity Church in Hull when he was offered the living of St. Mary's by the patron. He stayed at the church until his death in 1834. His son, John Scott II, took over. It was he that commissioned Sir Gilbert Scott, his cousin to carry out the works on the church in the 1860's. Unfortunately John Scott II died in 1865, aged 55, so did not see the work completed. He had five sons and before he died he allowed them and friends to use the church at the church. This then became the start of Hull F.C. rugby club. F.A. Scott was the only player and went on to captain the side in 1870. One of the sons was another John Scott III and he again took over from his Father at St. Mary's. He became Hull F.C's Club President in 1879/80. He became well loved by the parishioners and started the social action that the church is still associated with today, such as a soup kitchen, a penny bank for the poor and finding funds to have a nurse for the parish well before the NHS was conceived. He moved to Leeds in 1883 and died in 1906. Opposite the church in Lowgate, in the old General Post Office building is the pub The Three Johns Scotts to celebrate the family ties to the area.

https://pbs.twimg.com/media/CCQQLUpWMAEzdGN.jpg
The rood screen is what visually gives the Church instant appeal, and is the most recent addition. It was paid for anonymously in Memory of King Edward VII. It was designed by Temple Moor and made by Gilbert Boulton and erected in 1926. At the top, either side of the cross are St. Mary and St. John. The four 'Doctor's' of the church are below them, St. Ambrose, St. Gregory, St. Jerome and St. Augustine of Hippo. On the cross rail below them are ten angles playing various instruments.

https://pbs.twimg.com/media/CCQQKY8WEAEts8Y.jpg
A lovely photograph of the north aisle and chapel of the Nativity that is dedicated to John Scott III. It also shows the lovely stained glass windows that were largely installed in the works between 1866 and 1900. The work is by Clayton and Bell whose works are found all over England, USA, Canada, Australia and New Zealand. They started in business in 1855 and at their peak employed 300 at their Regent Street, London works. The were working up until 1993.

https://pbs.twimg.com/media/CCQQJccWIAEzKov.jpg
This is the second southern aisle added by Gilbert Scott in the 1860's. The Chapel is dedicated to St. Michael and is in memory of Canon Scott Ram who was a former vicar of St Mary's and died in 1928. The chapel was blessed in 1930.

My Thanks to Mr. Lee Brodie and his twitter account @LeeBrodie1 for the beautiful interior. photographs. The Church is once again looking to raise funds to continue the work of preserving this magnificent church. There is an active bell ringing tower as the bells were restored after 50 years in 2002. They do much work with the homeless and the Church is acting more and more as a music venue too. They are open for the September Civic Open weekend and often the bell tower and roof are open to visit. It is a little gem that should not be missed.
Posted by NB Holderness at 09:30