As Trade increased, and vessels got larger there was already calls for dock space in Hull as early as the 1830's. Even when Railway Dock in 1846, and Victoria Dock in 1850 opening more space was still required. In an effort to start the ball rolling The Hull Corporation, North Eastern Railway Co. and Hull Trinity House formed the West Dock Company. They drew up plans for a dock 1000 yds long and 14 acres in area. The tactic worked and The Hull Dock Company also formulated a bid to be considered by Parliament. In 1861 an Act was passed favouring the Hull Dock Company bid. This was for a dock 2500 yds long

https://bwml.co.uk/hull-marina/
This picture shows Humber Dock on the right and Prices Dock in the top right. Railway Dock extension is behind the tall warehouse above the station. The station is the original Manor House Street Station that was the original terminus of the Hull and Selby Railway in 1840. Once Paragon Street was built this station became goods only. Albert Dock entrance lock can just be seen in the bottom left corner. The area with the small boats, just south of the station was known as 'Paraffin Creek'.

Construction started in 1862. The site engineer was J.C. Hawkshaw. The plan was for the southern wall, next to the Humber, to be constructed on reclaimed land and a series of cofferdams were built to enable that work to be undertaken in three stages. A foundation stone was laid on the more easily constructed north wall in 1864 by the Chairman of the Hull Dock Company, William Wright. The walls of the dock were built of sandstone brought from Horsforth, near Leeds. These were fixed by sand lime mortar sat on a 10 foot thick concrete foundation. The whole sitting on a strata of clay. To reach this level clay and sand had to be excavated. These levels caused problems during the construction with 'boils' being fairly frequent. This was when fresh water that had found it's way along the sand level from the Wolds aquifer burst through. Work was delayed a month in 1866 when a boil caused a breech of the southern wall and the excavation was flooded. In 1867 there was further problems with boils and this time the work was put back eight months. This difficulty also led to the length of the dock beeing reduced form 400' long to 320' and a width of 80'. On completion it was still one of the largest locks in the country. The depth in the dock was to be maintained between 29' at spring tides and 24'6" at neap tides.


www.greenporthull.co.uk
Showing the lock entrance and the turning basin inside the lock and the length of the dock looking west.

The dock machinery including the capstans and lock gates, were powered by hydraulics with the system using 3 boilers supplying steam to a 40 HP steam engine that supplied the pressure of 700 psi via an accumulator. The North Eastern Railway had to re-route their track when the dock was constructed by then laid at least a double track down both sides of the dock with a track passing over the lock entrance via a swing bridge that was also hydraulic. That seems to be have been removed but I'm not sure when. The cost of building was £556,479, of which about £111000 was for the excavations, and about the same for the dock walls and £88,600 for the lock, not including the gates and machinery.  It was officially opened in 1869 by the Prince and Princess of Wales, Albert Edward, (who became Edward VII) and Alexandra. And was called 'Albert Dock' in his honour.

In 1972 it was closed to traffic whilst it was altered to accommodate the Hull deep sea fishing fleet as they were to move from St. Andrew's Dock, a little further west. The move was completed by 1975 and officially re-opened in 1976 by  Rt. Hon. Frederick MP, Minister of Agriculture Fisheries and Food. However soon afterwards the deep sea fishing declined rapidly after fishing grounds were lost following the Cod Wars. 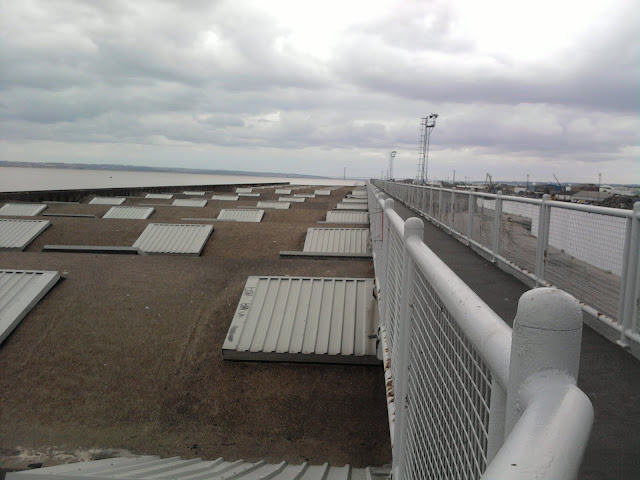 http://chris-osm.blogspot.co.uk/2011/07/docks-and-footpaths.html
An unusual item is that there is a public right of way runs along the Humber bank by the dock. At the west end, near to the city centre, this has been led on a walkway over the warehouse. This gives good views of the dock and the Deep, Pier etc. The fact that the hydraulic swing bridge has been removed means access is over the lock gates that again is unusual. A little hidden gem for visitors to the City that is not much of a walk from the Marina area.

http://www.hulldailymail.co.uk/body-found-in-albert-dock-in-hull/story-29808734-detail/story.html
The dock is very exposed to the wind, from just about any direction and  with it being comparatively narrow for larger modern ships it was always quite 'hairy' passing down it's length with any wind blowing. In recent times the dock has been used for laying offshore vessels during the downturn due to the oil price fall. Commercial shipping still uses the dock though.

In December 2013 a spring tide and tidal surge caused Cyclone Xaver an over topping of the Humber at Albert Dock and consequent flooding of the City Centre. The remedial work was brought forward two years and was completed in November 2015.
Posted by NB Holderness at 08:40