On this Remembrance Sunday one hundred years after the start of WWI I thought it appropriate to write about a recipient of the highest award for bravery award in the UK, the Victoria Cross. I know of at least two winners of the medal and I will tell the story of other winners at a later date.

John (Jack) Harrison couldn't be more connected to the Hull if he had tried. He was born in Hull on the 12th November 1890 close to Earles Shipyard where his father worked as a plater and boilermaker. His family wanted the best for him and he worked hard at school and did not leave at twelve like most others, so he was able to advance to St John's College in York where he trained to be a teacher. St John's is now St John's University, York. Not only did he do well in his studies but excelled at sport. He represented the college at cricket and swimming and was the captain of the rugby team. Once qualified he started teaching at a school in York and was spotted by members of the York rugby league club. He started playing for them and during the 1911/12 season he played five times and scored three tries. 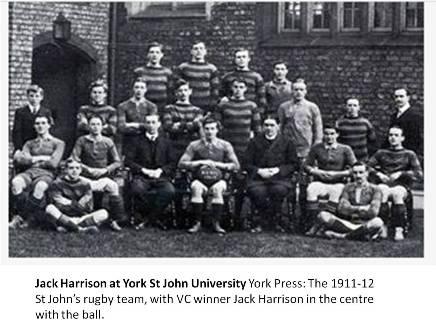 Jack returned to Hull to take up a position as teacher at  Lime Street School in September 1912. He also married Lillian on 1st September 1912 and then played his first game for Hull FC on 5th September 1912. It must have been a very busy time of his life, with an awful lot of changes. Jack went on to become a hero with the rugby fans as he scored 52 tries in the 1913/14 season, a record that still stands. He eventually scored 106 tries in 116 matches played which is a very impressive strike rate in  anybodies book. One of these tries was in the 1914 Challenge cup Final that helped Hull FC lift the trophy after defeating Wakefield Trinity in the final played at Halifax. Jack was selected to play for Great Britain but unfortunately with the outbreak of WWI the 1914 tour to Australia was cancelled.

He volunteered for the army not very long after his son, called Jackie, was born and on 4th November 1915 started Officer training as a Private in the Inns of Court OTC. On completion of his training on 5th August 1916 he was commissioned as probationary Temporary 2nd Lieutenant in the East Yorkshire Regiment and was assigned to 6 platoon 11th Battalion also known as the Tradesmen.
At this time on the Somme front as a whole the British Army were losing about 300 men a day.  In February 1917 Jack and his men once more moved into the front line and on 25th March they were called upon to undertake a patrol into no-mans land. By the end of the nights work jack had won a Military Medal. The citation reads,

" For conspicuous gallantry and devotion to duty. He handled his platoon with great courage and skill, reached his objective under the most trying conditions and captured a prisoner. He set a splendid example throughout."

On 3rd May 1917 his Brigade were ordered to make a night attack on a wood near Oppy in the Pas de Calais. Jack's platoon were soon in the thick of it and there appears to have been much confusion as it was dark and the artillery fire from both sides was making life difficult for them to move about. Eventually they came upon on the German trenches that were well dug in and became pinned down. Several attacks were made on the trenches but each was repulsed. Eventually Jack, armed with a mills grenade and his pistol attempted to silence the machine gun to enable his men to continue.
Jack's citation for the  Victoria Cross reads as follows;

"For most conspicuous bravery and self sacrifice in an attack. Owing to darkness and to smoke from the enemy barrage, and from our own, and to the fact that the objective was in a dark wood, it was impossible to see when our barrage had lifted off the enemy front line. Nevertheless 2nd Lieutenant Harrison led his company against the enemy trench under heavy rifle and machine gun fire, but was repulsed. Re-organising his command as best he could in No Man's Land he again attacked in darkness, under terrific fire, but with no success. Then turning round, this gallant officer single handed made a dash at the machine gun, hoping to knock out the gun and so save the lives of many of his company. His self sacrifice and absolute disregard of danger was an inspiring example to all. (He is reported missing, reported killed.)"

Jack Harrison was never seen again and his body has never been found. He is commemorated at the Commonwealth War Graves Commission Arras memorial.

His wife Lillian was presented with Jack's medal by King George V at Buckingham Palace in March 1918.

Times were not easy for war widows and the people of Hull raised a fund for for their hero on the rugby pitch and the battlefield to help pay for the education of young Jackie.

Yong Jack went on to serve as a Captain in the West Riding Regiment in WWII, and made the ultimate sacrifice during the defence of Dunkirk and is buried in Dunkirk's cemetery.

Lilian went to live to a good age and died 5th December 1977. She had left Jack Harrison's medals to the East Yorkshire Regiment in Beverley. This has now been incorporated into the Prince of Wales Own Regiment of Yorkshire museum in York.

On this Rememberance Sunday it is good to know that Jack Harrison has not been forgotten for in 2002 a group of Hull FC fans decided that they would like a memorial to their hero and started a fund to do so. By 2003 they had raised sufficient to erect a memorial outside the KC Stadium. It was sculpted by Jenny Oliver. 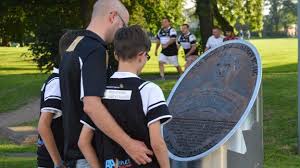 The memory and courage of Jack Harrison is set to continue as a Trust has been set up to raise funds for the presentation of memorial medals to children of lesser ability who use rugby league to overcome adversity. The fund is always open and would welcome any donations at

WE WILL REMEMBER THEM.
Posted by NB Holderness at 11:51