Fact 20. Hull was the first place to give mass Polio vaccinations.

Polio is short for poliomyelitis which is spread by nasal and oral transmission and infected feces. The infection spreads to the digestive tract and in 98% of cases there is just a slight viral illness. Sometimes, 1 to 2% of cases, it passes into the blood stream and there it attacks the nervous system. This causes paralysis and in many cases this results in withered limbs and was common to see people with leg irons on to give support whilst walking. Sometimes the paralysis affected the lungs and chest and the patient could die if not assisted in their breathing. This is where the 'iron lung' came in. In 1955 a Doctor Salk had developed a vaccination that injected a dead virus. This required several re-vaccinations to give good protection. By 1961 Doctor Sabin had developed a live vaccine that could be given orally but this wasn't taken up on a large scale due to worries of using a live virus vaccine. In the UK the problem was 30,000 disabled between 1947 and 1958.

In September 1961 an explosive outbreak of Polio hit Hull. It was thought at the time that it may have come via the city's docks. by 6th September there were 21 suspected cases and the injected vaccine did not seem to be holding the line. The Council Medical Officer for Health Dr. Alexander Hutchison contacted the government Ministry of Health to seek permission to use the new Sabin oral vaccine to stem the outbreak. By 12th October permission had been granted by which time there were 23 confirmed cases and 42 suspected. They gave them selves 5 days to set everything up and there were 300 volunteers to help.

Dr A. Hutchison with a new batch of the vaccine at William Wright Dock cold store with Mr F. Kilburn and Councillors Hobden and Shepherd.

The vaccination centres were set up in 40 schools and 11 other places such as clinics, church halls hospitals and Hammond's Department Store. They all worked very quickly and were ready a day ahead of schedule and all was ready to open at 1700 on the fourth day. This news was broadcast and sent out in the Hull Daily Mail and there were queues formed by early afternoon. 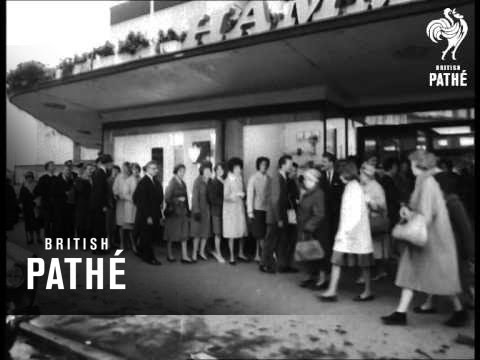 The vaccination was given by putting two drops of the vaccine on a sugar lump or in a teaspoon of syrup for infants. The sugar lumps were provided free by Tate and Lyle. The campaign was a great success and in two weeks 358,000 were given the vaccination. That is 55,000 more than the population of the city at the time.

This was the first time that the Sabin vaccine had been used in Western Europe for a mass vaccination to halt an outbreak. The success of the vaccine could not be statistically tested as the coverage of the vaccination was so good there was no appreciable sample that hadn't been vaccinated. The 'epidemic' had passed after two weeks leaving 85 having suffered the results of polio. This use of the oral vaccination led to the use through out the country and has almost eliminated polio today in the UK. Hull leading the way for the rest of the Nation.
Posted by NB Holderness at 08:06